McLaughlin: We stuck it up a few people

McLaughlin: We stuck it up a few people 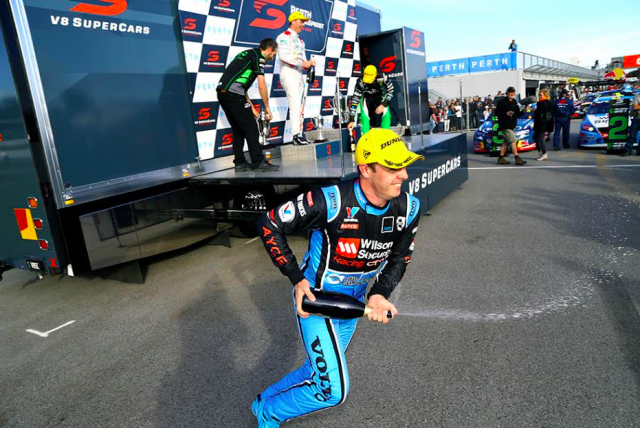 The team was dealt shock news from global Volvo bosses on the eve of the event that its factory deal would not be renewed at the conclusion of the season.

With the manufacturer also declaring that its cars and engines must be returned to Sweden at year’s end, uncertainty over GRM’s future was the talk of the paddock throughout the weekend.

Although disappointed to have narrowly missed out on snatching victory from Mark Winterbottom in the closing laps, McLaughlin says that bringing a trophy to the team was a satisfying result.

“It’s been a tough week for everyone and it was time for me and Moff (team-mate James Moffat) to stand up and lead the team,” he said.

“That was my goal this weekend and we had a really good result for the whole team and (we) stuck it up a few people.”

McLaughlin added that team owner Garry Rogers’ emotion at the end of the race emphasised the importance of the result.

“It’s pretty cool when you see your boss at the end of the race in tears pretty much,” he said.

“When we walked into the track on Thursday for the track walk a lot of the guys’ heads were down.

“It was an awkward situation because no one really knows what’s ahead.

“But then when Garry and Barry gets the whole group together and says ‘we’re not going anywhere, we’ve had these problems before and we’re going to press on’.

“That lifts everyone and obviously yesterday was a bit unfortunate (finishing 11th with bent steering).

“We had a quick car and it was all about using it today.

“I had a good race obviously with the two-stopper. It was satisfying.”

McLaughlin was full of praise for Winterbottom’s effort to hold him out over the final two laps.

“Mark did an awesome job,” he said.

“I knew I was faster into the bowl (Turn 6 on the penultimate lap) and I had a go. I had it all locked up trying to stop, I didn’t want to hit him.

“I wish I didn’t have a go at (Turn) 7. I got too excited. I thought I was having a run and I was worried because when I got to him I thought ‘oh, crap, my tyres are gone as well’.

“I knew if I could get him on the second last lap it would help me a little bit more. I just went too early and stuffed it.”