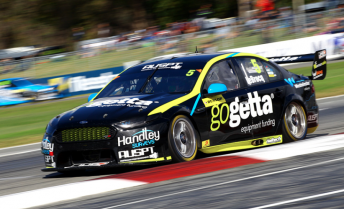 Jack Le Brocq held out James Golding in a frantic drag race to victory in the second Dunlop Series heat at Barbagallo Raceway.

The Prodrive Ford driver made a sluggish start from pole position and dropped to as low as fifth on the opening lap before the Safety Car intervened.

Le Brocq was back up to second by the time the yellows flew however due to a multi-car incident at Turn 6.

Andrew Jones and Garry Jacobson both found the sand after the former was nudged in the back by Anton De Pasquale.

While Jones was able to rejoin, series leader Jacobson was stranded, triggering the Safety Car.

Le Brocq capitalised on a mistake from Paul Dumbrell to secure the lead once racing resumed.

The early yellow made the race a time certain finish after 25 of the scheduled 28 laps.

Golding tried a move at the final corner but Le Brocq just held on to take the win by 0.03s, as Dumbrell claimed third for Eggleston Motorsport.

Kurt Kostecki produced a highly impressive drive as he charged through from 12th to finish fourth.

Todd Hazelwood ran as high as third but settled for fifth ahead of teenager Alex Rullo, who starred in the Lucas Dumbrell Commodore.

De Pasquale came home in 18th after he received a drive-through penalty for causing the opening lap Safety Car.

The Dunlop Series will be back in action for Race 3 which is scheduled to start at 1240 local time.