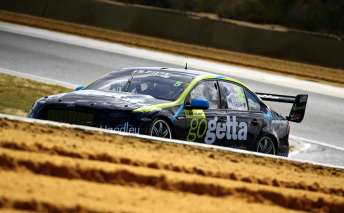 The Prodrive driver suffered another slow start but managed to inherit the lead on lap 5 when Paul Dumbrell was caught out by fluid dropped by Eggleston Motorsport team-mate Liam McAdam at the final corner.

McAdam found himself beached in the sand trap at the final corner after sustaining damage following a clash with Dan Day and Mathew Palmer, which brought out the Safety Car.

Le Brocq quickly stormed into a healthy lead once racing resumed but was forced to hold his nerve through another Safety Car period, caused by Matt Chahda, before claiming the victory.

Taz Douglas produced an impressive hard charging drive through the field to finish second, while Todd Hazelwood netted third in a race shortened to 20 laps.

James Golding held second in the early stages behind the fast starting Dumbrell but was unable to maintain the pace at the front.

The Garry Rogers Motorsport driver eventually slipped back to fourth while Macauley Jones made the most of the early drama to finish fifth.

Andrew Jones came home in sixth ahead of the Darwin teenager Bryce Fullwood, who impressed throughout.

Dumbrell hauled his Holden Commodore home in eighth after his mistake at the final corner earlier in the race.

Richard Muscat was ninth as Shae Davies, who ran fourth before being caught out by the fluid deposited by McAdam, rounded out the top 10.

Garry Jacobson managed to fight his way from the back of the field to finish 12th which has left him tied with Le Brocq at the top of the standings.

The Dunlop Series will head to the Castrol Edge Townsville 400 for the fourth round from July 8-10.