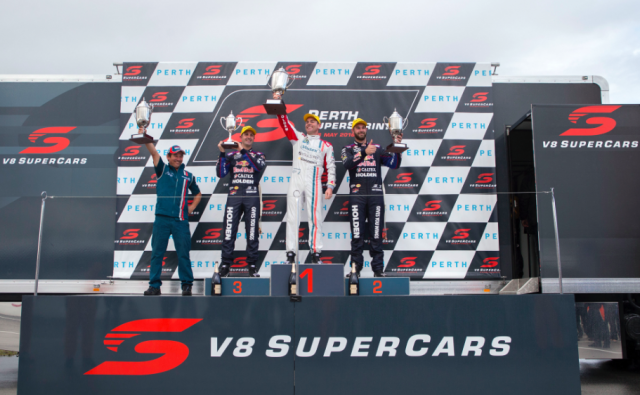 Triple Eight locked out the podium in Race 8

Shane van Gisbergen paid tribute to the enduring career of team-mate Craig Lowndes after being pipped for victory by the veteran in Race 8 at Barbagallo.

Lowndes scored his first win of the season and the first for his new TeamVortex Triple Eight crew after an inspired tyre strategy paid dividends.

Van Gisbergen led 43 of the first 46 laps before a two-stopping Lowndes swept to the front with just four remaining.

While strategy was the deciding factor in the result, Lowndes’ ability to cut through the field while losing minimal time underlined his evergreen race craft and affinity for the Perth venue.

“It’s pretty impressive the run he’s had,” he said when asked of Lowndes’ career.

“When we were all kids growing up watching he was winning then.

“To be at the top of his game still is pretty impressive. I’m definitely learning a lot.

“There’s parts of his driving style that are very different to other people and I can still learn a lot from that.

Lowndes heaped praise on engineer Ludo Lacroix for today’s victory, having boldly called his driver into pitlane just over 20 laps from home while in fourth place.

“When he called me in, I thought it was a bit strange but I didn’t question him,” said Lowndes.

“From that point on Ludo was counting down the laps and he told me I had a four second lead.

“But looking at the big screen they were disappearing over (Turns) 4 and 5 as I was coming down the main straight, so I couldn’t work out how I had a four second lead.

“Anyway, he realised that these guys weren’t going to pit, so then he asked me to push.

“The car responded and it was good enough to be able to do the lap times at the end, which last year we struggled with.

“I’m very thankful that it paid off because it could have gone either way for us.”

Out front, Van Gisbergen had fended off first Chaz Mostert and then Jamie Whincup to hold the lead, but had no answer for Lowndes’ late pace.

“We pitted for slicks and at that stage knew we were going to the end as we pre-discussed,” Van Gisbergen explained of his one-stop strategy that was employed by the bulk of the field.

“I just did my own pace and didn’t let anyone past. We won our race but obviously pitting was the way to go.

“I got the option to pit if I wanted to, but at that stage I thought the grip was going to be ok.

“When Craig pitted we either needed to have done it that next lap or go to the end.”

Giving Triple Eight its first one-two-three in a championship race, Whincup said his garage had elected against running Lowndes’ strategy due to predictions of further rain.

The weather only arrived on the final lap, too late to require another stop for wets.

“We thought it was going to rain with five or 10 to go, which is what made us choose to stay out,” he said.