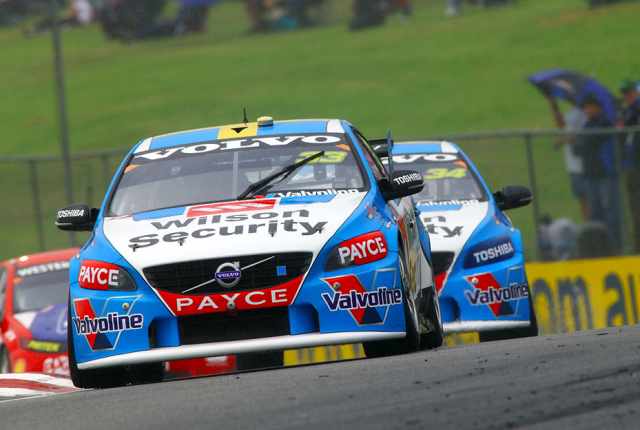 GRM’s Volvos on track at Barbagallo

A defiant Garry Rogers has reiterated his intention to continue racing Volvos next season, despite Polestar’s plan to recall the team’s current cars and engines to Sweden.

Wednesday’s bombshell from Polestar that it is set to pull Volvo’s factory support was followed by an equally stunning statement from engine supplier Cyan Racing that it would “bring back our engines and race cars to Sweden after the season”.

While appearing to categorically quash any hope of GRM continuing to field Volvos in a privateer capacity, the veteran team owner insists he’ll find a way to retain the S60 package.

“As far as I’m concerned we will be,” Rogers told Speedcafe.com when asked if he still hopes to race Volvos next year.

“But for now we are taking every single race meeting as it is, preparing our cars, getting it ready and making sure that we’ve got our plan in place (for next year).”

Rogers declined to elaborate further on how such a plan could work, particularly when Cyan developed, builds and owns the engines that are homologated for the cars.

The ownership of the rights to the S60 V8 Supercars body shape is somewhat less clear, with GRM having undertaken the work on the design and homologation from its Melbourne base.

GRM would, however, need a Volvo engine supply in order to campaign the S60 body under the category’s rules, as a proposed ‘generic’ engine for use in the Car of the Future never came to fruition.

Volvo’s current agreement with GRM is said to include a deal for Polestar to buy the cars at the conclusion of the season, which Rogers cryptically claims is “not quite” the case.

Regardless of their racing future, V8 Supercars regulations designed to help the category enforce its ban on oversees testing would prohibit the cars from leaving the country in their complete form.

Various elements of the cars, including the control chassis, rear suspension and parts of the aerodynamic kit are V8 Supercars’ own intellectual property and must remain within Australia.

Rogers meanwhile describes the sudden decision by Polestar management to kill the factory program as “bewildering” after believing that a deal had been in place to continue.

Perhaps ominously, Polestar informed the team ahead of this season that its logos were no longer to be used on the cars.

This followed previous public declarations from management that racing with a V8 engine does not conform with its intended future brand image.

According to Rogers, however, Polestar had indicated on several occasions that the program would remain if Volvo Australia and its dealers continued to support it.

“Volvo in Sweden had informed both us and (Volvo Car Australia CEO) Kevin McCann that, if Australia wanted to do it and the dealers, who were funding it, were behind it, then Sweden would be happy enough with that,” he said.

“That’s what we were told all the way through. When Kevin and I went to Sweden in January and had the meeting there to firm it all up, it was exactly the same thing. There was no variation.

“Then out of the blue we got a message on Tuesday to say there’d be a phone hook-up on Wednesday. Then within 30 seconds they said ‘this isn’t happening’.

“That wasn’t what was discussed or agreed. I think Kevin was more shocked than I was to be quite honest.”

Adding to the disbelief, Barry Rogers had met with Dahl in Sweden last weekend and returned home also believing that the deal would continue.

In what was seemingly another sign of the strength of the relationship, GRM’s star driver Scott McLaughlin had also been in Sweden undertaking a one-off drive for Polestar in the Scandinavian Touring Car Championship.

Garry Rogers meanwhile dismissed suggestions that a newspaper story last week quoting the team owner as saying that the deal was already done had angered Polestar management and potentially triggered the sudden change of heart.

“I don’t think so,” he said of whether the story played a role in the shock outcome.

“It was done. All the correspondence and dialogue that we’d been having with them, it was done.

“They knew that we had done every single thing. McCann had the budget there. Everything was done.” Garry Rogers in the GRM garage at Barbagallo