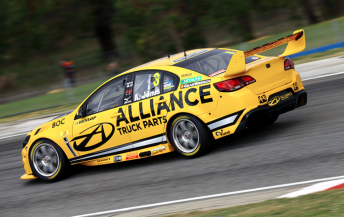 Andrew Jones claimed pole position for the Dunlop Series with a last gasp effort in an eventful qualifying session at Barbagallo Raceway.

The field was greeted with a damp track but grip levels changed rapidly as the session progressed and the surface dried.

Provisional pole changed hands on several occasions as the field switched from wet to slick tyres with 10 minutes remaining.

A flurry of late times on slick tyres saw Jones jump to the top with a 59.72 which snatched pole away from Jack Le Brocq by 0.0013s.

Shae Davies was one of many drivers to enjoy a spell at the top of the times but in the end he had to settle for fourth ahead of Brad Jones Racing’s Josh Kean.

Series leader Garry Jocobson was shuffled down to sixth in front of Macauley Jones and James Golding.

Paul Dumbrell was among the last runners to switch to slick tyres which saw him fire in a couple of laps on the fresh rubber.

The Eggleston Motorsport driver ended up ninth while local racer Kurt Kostecki, who was among the first to fit slick tyres, rounded out the top 10.

Todd Hazelwood will start from 11th ahead of Taz Douglas, who suffered a small off during the session.