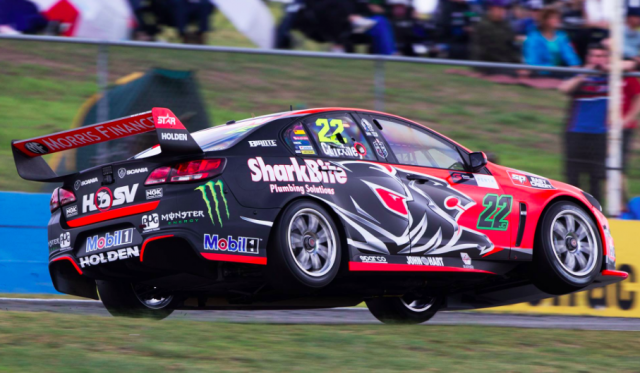 James Courtney says that the Holden Racing Team’s lack of a confirmed deal from the manufacturer is not a concern as he prepares to negotiate his own future with the squad.

Holden’s future in the category remains a key unknown, with persistent suggestions that it could scale back its support and focus solely on Triple Eight next year or withdraw completely.

The manufacturer has publicly indicated that it will continue in some form, but is yet to determine its plan as debate continues internally over its marketing direction amid the end of local production.

Courtney, who joined the HRT as reigning V8 Supercars champion in 2011, said he’s “not really” concerned when asked about the scenario.

“Simon (McNamara, Holden motorsport and sponsorship manager) has got it under control, he tells me,” said Courtney.

“I’m not bothered at all. Every three years this rolls around, everyone blows up and says ‘they’re going to pull out, they’re not going to do it’.

“Every three years for the last 25 years HRT has been here. In three years time you (media) will be saying it’s all over again.

“It seems like it’s all going to keep rolling on. Ryan and Martine (Walkinshaw) are heavily committed and massively into this to keep it going.”

Courtney underlined his ongoing desire to win a drivers’ championship for HRT, which the team not been achieved since Mark Skaife’s fifth and final title in 2002.

“Six years ago I came here and set a goal and I’m a long way from achieving that at the moment, with a championship,” he said.

“Ideally I’d love to win a championship for HRT, that’s what I want to do.

“So if they’ll have me back and we have a championship-winning car, then I’ll do it.”

The HRT has enjoyed a mixed start to the year, with Courtney winning in Adelaide before the squad lost its way at Symmons Plains and Phillip Island.

Drivers Courtney and Garth Tander were barred from speaking to media about a recent test day as team boss Adrian Burgess attempts to keep public expectations in check.

Courtney has however revealed that a recent debrief sparked a turning point in how the team operates, which is hoped will improve on track performance.

“A few hard words were said between us all, and we all had to be honest with how things were and start again.

“Nobody was yelling or screaming. It was just time to be honest and work out exactly what we know and what we don’t know and go from there.

“The car’s really quite different to what we run. The hardware side of things is the same, but the way we go about it is very very different.

“Hopefully building on that we can develop that process, and hopefully stay towards the front.”