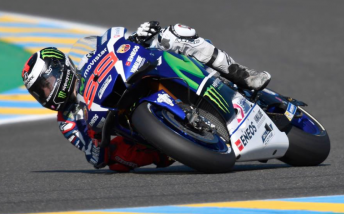 Jorge Lorenzo posted the fastest ever MotoGP lap at Le Mans on his way to pole position for the French Grand Prix.

The Movistar Yamaha rider became the first man to lap the Bugatti circuit in the 1:31s as the reigning world champion dominated qualifying.

Marc Marquez was beaten to pole at Le Mans for the first time in his premier class career but will start from second, while Andrea Iannone completed the front row despite a mid-session fall.

The practice form guide suggested Lorenzo was the man to beat and the Spaniard immediately laid down the fastest lap of the weekend before going quicker again.

After a minor off at Garage Vert, the defending world champion sizzled to a record breaking 1:31.975s with the chequered flag flying.

“I’m very happy with this track record and with pole position,” said Lorenzo.

“We worked very hard to improve all the small details in all the corners.

“Finally the bike was able to keep a constant pace and also ready to make very fast lap times.”

Marquez jumped to second just moments later on his Repsol Honda, having sat only fifth after the first runs thanks to a similar error to Lorenzo at Garage Vert.

That lap dislodged Iannone, who had moved into second. The Ducati rider was unable to improve thereafter due to a fall on the out lap ahead of his second run.

Iannone blamed the incident on a water pump failure which leaked onto his tyres, but nevertheless he claimed a first front row start since Australia last year.

Pol Espargaro, Andrea Dovizioso, and Bradley Smith made up the second row, while Valentino Rossi could only manage seventh and Pedrosa 11th.

Danilo Petrucci qualified 10th in his return from injury but did suffer a late fall, while Aleix Espargaro made no advance on progressing from Q1 and will start 12th.