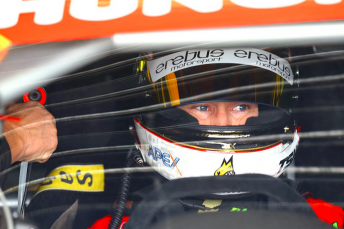 Erebus Motorsport’s slow start to the V8 Supercars season has failed to dampen David Reynolds’ belief that the team can build itself into a competitive force.

A change of workshop, staff and manufacturer over the off-season has effectively seen the former Mercedes-AMG customer team, which won at Barbagallo 12 months ago, restarted from scratch.

Reynolds admits that the team is still struggling to understand its ex-Walkinshaw Holden equipment, which it is running with only an engine and parts deal but no data support.

In stark contrast to a career best 2015 while at Prodrive, Reynolds has qualified no better than 16th for the opening seven races of the year and scored just one top 10 finish.

While a frustrated Will Davison split with Erebus at the end of last season midway through a four-year contract, Reynolds says he is fully committed to seeing out his two-year deal.

“Betty and Dan (Klimenko, team owners) are awesome to work for. I’ve got faith in them and they’ve got faith in me and the same goes for Barry Ryan (Erebus general manager).

“Motorsport is a lot more fun at the front and you’ve got to change your perception when you’re down the back.

“But I really love all the boys and the environment we’ve got going. I really do. We’re committed to building the team together so we can move up the grid.

“What I really like is that if we build a good car and end up at the front I’ll get a lot of satisfaction out of it.

“We’re taking something and trying to make it better, making it our own thing.

“We’re a small team. We don’t have all the resources of the big teams.

“We’re a shopper team that can buy things off others and try bits and pieces here and there to see if they work. That’s the beauty of it.”

Reynolds praised the ongoing effort of the team to improve the car between events, stressing the hard work that goes into the development process.

The team has overhauled its anti-rollbar system since Phillip Island, applying lessons learnt with its previous Mercedes machinery into the Holden chassis.

Just what can be achieved this year remains unclear to Reynolds, however, with a planned move to a bigger factory in Melbourne over the coming months looming as another short term challenge.

“Honestly I don’t know, I don’t really know,” he said when asked of what Erebus can achieve this season.

“It’s just going to take us a while to understand what we have. We don’t understand anything yet.

“The speed isn’t there at the moment, but every time we go out we’re learning something that’s wrong with the car that we can fix.

“When we move factory again that’s probably going to detract a bit from our planning.

“But in actual fact, once we get set up there I think we’ll be alright because there’ll be a bit better structure going on.

“Everyone knows it’s a long road, but if we get our car right on the weekend it’s still possible we can win.”

With team-mate Aaren Russell a main series rookie, Reynolds admits that the focus is very much on him to develop the package in the right direction.

Typically forthright on what he describes as the “simple science” that governs the sport, the driver is under no illusions of being able to man-handle the car to the front.

“When you’ve got grip you’re at the front and when you don’t you’re down the back,” he said.

“It’s that simple. You can have grip, make a mistake and be down the back, but you can’t not have grip and be at the front.

“If you do there’s 25 people that’ve made a mistake and everyone is a professional these days, so it doesn’t happen.”