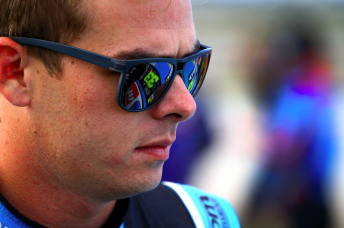 Scott McLaughlin set aside a troubled week for Garry Rogers Motorsport by topping opening V8 Supercars practice aboard his Volvo at Barbagallo.

Just two days after Volvo’s shock announcement that it will withdraw at season’s end, McLaughlin pipped Prodrive’s Chaz Mostert to the quickest time in Practice 1.

Persistent morning drizzle saw the field start the session on wet tyres, before a developing dry line allowed a move to slicks within the opening 15 minutes.

A multitude of drivers traded the quickest time as the track conditions gradually improved, before Mark Winterbottom went 0.5s clear at the top of the order with 25 minutes remaining.

McLaughlin, however, saved his best until last, recording a 56.42s to bring some much needed smiles to the GRM garage.

“The car feels nice, but there’s a long way to go yet,” said McLaughlin.

“We put our second set of tyres on just to get a feel in case it rains again (this afternoon).

“Balance wise I’m happy, but it’s been a tough week that’s for sure.”

A similarly late effort from Tim Slade put his Brad Jones Racing Holden third after struggling for pace on his earlier set of slicks.

“I didn’t get too flustered or worried about how far we were off the pace because traditionally the BJR cars are quite strong here,” he said.

“Obviously the time was there on those tyres, but we only did one run on them so we don’t know how well they’ll hang on.”

The combination of a dry line and wet verges saw several taste the circuit’s famed sand traps during the session.

David Reynolds was the only one to cause a red flag, beaching his Erebus Holden at Turn 6 after just eight minutes.

“It was all my fault, I was trying to be a hero… it’s probably not an ideal scenario,” he quipped as the team cleaned the dirt from his Holden.

DJR Team Penske, Team 18 and Nissan Motorsport were the only teams to run co-drivers in the session, with BJR electing against installing Andrew and Macauley Jones due to the tricky conditions.

Penske co-drivers Luke Youlden and Tony D’Alberto were both among the front-runners during the early going before handing over to Coulthard and Pye respectively.

“I think Phil (Keed, engineer) gave me a good set of tyres for a change,” smiled Youlden.

The day’s second 60 minute session will kick-off at 1440 local time.