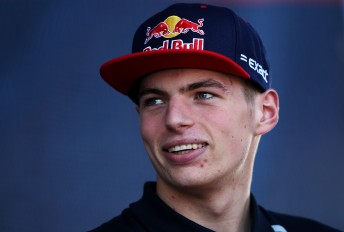 Helmut Marko says the promotion of Max Verstappen to Red Bull is to ease pressure on Daniil Kvyat and help quell unrest at Toro Rosso.

Red Bull announced yesterday that Verstappen will partner Daniel Ricciardo at the Milton Keynes operation from next week’s Spanish Grand Prix in a move that sees Kvyat demoted to Toro Rosso.

A shock move just four races into the season, Marko has moved to clarify the reason behind the switch.

The Red Bull power broker says Kvyat has struggled to replicate the form he showed last season which saw him narrowly out score Ricciardo in the 2015 campaign.

Marko says the move is not solely down to Kvyat’s much publicised driver error at the Russian Grand Prix.

The decision has a secondary element which is designed to relieve the internal pressure at Toro Rosso between Verstappen and team-mate Carlos Sainz, which emerged at the Australian Grand Prix earlier this year.

Red Bull is yet to confirm if Verstappen will retain the seat for the remainder of the season.

“It was primarily a measure to take away the pressure off Daniil,” Marko told Motorsport-Total.com.

“This year he has not been near the same performance as last year.

“He has been on average three to five tenths (of a second per lap) slower than (team-mate Daniel)
Ricciardo. Last year he was at eye level.

“He has been very inconsistent, had many ups and downs, and the crash in Sochi was as a consequence of the internal pressure he had built himself. It did not come from us.

“Romain Grosjean (while at Lotus) was once in a similar situation when he had crash after crash.

“We wanted to avoid that, and our luxury is we have the ability to set him up for Toro Rosso again.

“On the other hand there has been considerable unrest at Toro Rosso between Verstappen and
Sainz, so we have solved several internal problems.

“And we have not removed Kvyat. He is still with us in the squad, and Toro Rosso is a good midfield team.”

Verstappen is eagerly anticipating his opportunity at Red Bull and says he hasn’t set any goals for his debut at Barcelona next week.

“I go there (to Barcelona) with no expectations to be honest,” said Verstappen.

“I just want to adapt to the car, understand it better and better every session and like I said before, study the data and see what my team-mate is doing because the most important thing is to score points.