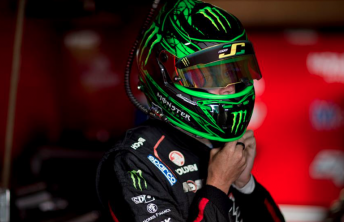 The Holden Racing Team’s James Courtney emerged from a rain hit opening day of the Perth Super Sprint atop the timesheets.

The 2010 champion recorded a 55.93s best with five of the 60 minutes remaining in Practice 2 before a final shower of rain prevented any further quick times.

Courtney’s effort had eclipsed that of previous fast man Craig Lowndes, who had clocked a 56.14s when running his new soft tyres five minutes earlier.

The timing of the rain made for a mixed order as many were denied a chance to run their new tyres.

DJR Team Penske’s Scott Pye had gone second in the closing stages, only to lose his lap for exceeding the track limits.

In a repeat of the opening session, the 60 minutes of running began with the field on wet tyres.

Lowndes was one of five drivers to forgo the early moments, waiting until conditions improved before joining the track.

The slicks started to come out after the opening quarter of an hour, with Jamie Whincup the first to undercut fastest wet tyre runner McLaughlin.

Times quickly tumbled thereafter, although it took until the 35 minute mark before McLaughlin became the first to undercut his own Practice 1 best.

The rain then returned, sending all 26 cars to the pits for a brief period while the teams waited for the weather to clear.

After seeing Lowndes and then Courtney eclipse his time, McLaughlin was one of many to be denied a final quick lap by the late rain.

Whincup ended up down in 22nd after an electrical issue saw the six-time champion coast into the garage with just over 10 minutes remaining.

The Red Bull Holden returned to the track for the session’s dying stages, but failed to improve his earlier time due to the rain.