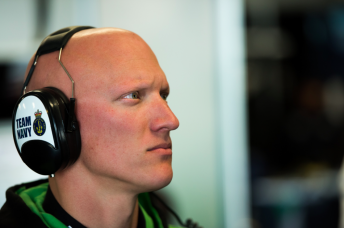 Mark Winterbottom will be joined by Dean Canto for the Pirtek Enduro Cup this season as part of a reshuffle of Prodrive’s line-up.

Entering his ninth endurance season with the Ford squad, Canto moves across from the team’s #55 entry which he shared with David Reynolds in recent years.

The move sees Canto remain in The Bottle-O colours following the sponsor’s own switch onto Winterbottom’s entry for 2016.

Winterbottom’s previous co-driver Steve Owen will remain with the squad, which is yet to confirm pairings for Chaz Mostert and Cameron Waters.

“It makes sense for a lot of reasons and I am really excited to be pairing up with him this year,” said Winterbottom of linking with Canto.

“He’s a really talented, reliable driver and he has always been one of those guys who I’ve wanted to drive with.

“People know him as ‘The Bottle-O driver’ too so it makes sense from a branding perspective,” the current champion said.

“He has a wealth of experience and is hungry to win races as well. He started Bathurst from pole position last year and did a fantastic job in that race.

“He might have the opportunity to start some races for us, who knows, but the best thing about him is that I know that when he gets in the car you know he’s going to try and get you in the best possible position to close out the race.”

Twice a race winner at the Gold Coast 600, Canto says he’s looking forward to pairing with Winterbottom for the first time.

“It’s great to have a bit of a change,” Canto said.

“We’ve been team-mates for a long time now but haven’t actually driven together so that’ll be a fun experience.

“I’ve sat in countless engineering briefings with Mark and his engineer Jason so I know of how they operate, but you never know what’s going to be different with the car so getting these first few practice sessions in will be important.”

Canto is in action at Barbagallo this weekend in the Australia GT support races, where he’ll co-drive Andrew Taplin’s Lamborghini.