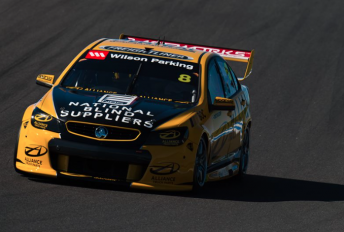 Andrew Jones made the most of limited dry track conditions to set the pace in practice for the third round of the Dunlop Series at Barbagallo Raceway.

Wet weather affected both 40 minute sessions at the Western Australian track which kept the 24 car field on its toes throughout.

Jones emerged on top in the dry running at the start of Practice 2 with the Brad Jones Racing Holden posting a 57.91s effort.

The effort would stand as torrential rain hit the circuit at the halfway point before subsiding with 10 minutes remaining.

Eggleston Motorsport’s Paul Dumbrell was third fastest with his best effort arriving in first practice before the weather intervened.

The tricky conditions caught out several drivers with Adam Marjoram and Jake Kostecki sliding off at Turn 1, which brought out the red flags halfway through the first hit-out.

Matt Chahda, Chelsea Angelo and Alex Rullo also endured excursions in the session which was eventually shortened by five minutes due to the former’s off at Turn 1.

Chahda, newcomer Garry Hill and Jacobson were caught out in the second session but were all able to rejoin the track unscathed.

The Dunlop Series will return to the track for qualifying on Saturday at 1105 local time.