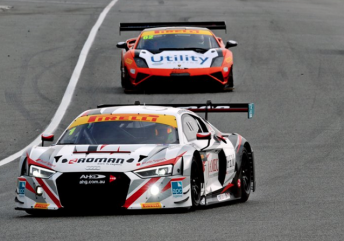 The Italian star quickly adapted to the Western Australian circuit having topped practice prior to his run in the first of two 20 minute qualifying sessions.

Called up by Jemec Pem Racing as a replacement for reigning champion Christopher Mies, Bonanomi posted a last gasp 57.88s effort on a drying track to score pole in the Audi R8 GT3.

Racing alongside Geoff Emery, who took part in second session, the pair claimed the third consecutive pole for the entry this season.

Heavy rain ahead of Qualifying 2 ultimately saw the times posted in the earlier session set the grid for Satruday’s opening race.

The Audi of Greg Taylor and Barton Mawer emerged as Bonanomi’s nearest rival with the latter posting a time 0.8s adrift of the works Audi driver.

Justin McMillan and Glen Wood’s Lamborghini was third fastest ahead of the McLaren 650S of Klark Quinn and the Tekno Autosports McLaren 650S entry of Jonathon Webb and Matt Kingsley.

Canto was the only driver to improve in the treacherous conditions which greeted drivers for Qualifying 2.

The Walkinshaw Racing Porsche 911 GT3 R will start from 11th on its Australian GT Championship debut.

Aaron Tebb, who will join John Martin for the round, posted the time in Qualifying 1.

The first of two 60 minute races this weekend is scheduled to begin on Saturday at 1215 local time.

The second row of the grid will be shared by John Bondi (Holden Monaro) and Will Colton (Ford Falcon XY).