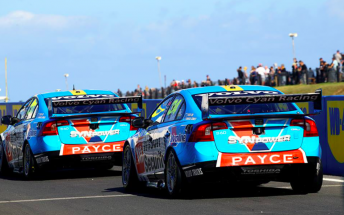 Garry Rogers Motorsport’s plan to continue racing Volvos next season appears to have been dashed following the latest twist in the manufacturer’s exit from the V8 Supercars Championship.

After confirmation from global motorsport arm Polestar and Volvo Car Australia that support will be withdrawn from GRM, Cyan Racing has also announced it will sever ties with the team.

Owned by Christian Dahl, Cyan is Polestar’s official motorsport partner, developing and supplying the 5.0 litre Volvo V8 engine to GRM from its base in Gothenburg, Sweden.

It was thought that a potential deal between Cyan and GRM would allow the team to continue to race its current equipment.

Extraordinarily, the Cyan statement says that it will end its technical cooperation with the team and recall the Volvo V8 Supercars and engines to Sweden at season’s end.

Dahl subsequently confirmed the recall plan to Speedcafe.com, stating that the current race cars and engines are “Cyan Racing property”.

”We will continue our technical cooperation throughout the remainder of the 2016 season on the current three-year contract,” said Dahl in a statement.

“After all, Cyan Racing was involved from day one when the cooperation was created with Volvo Polestar, so it is a matter of both sporting competitiveness and commitment as well as business ethics to see this through.

“However, Volvo Car Group’s performance brand Polestar is our assignor in motorsport and decisions from this group sets the precedent for our agenda and this means that we will cease the activities with Garry Rogers Motorsport in the V8 Supercars after 2016 and bring back our engines and race cars to Sweden after the season end.”

Team owner Garry Rogers had told Speedcafe.com in the wake of the Polestar announcement on Wednesday afternoon that his team would continue to campaign Volvos in 2017.

The team subsequently issued a statement titled “GRM to continue with Volvo in 2017” reaffirming its intention to race on with its S60s.

“Polestar advised us at the start of this season that their involvement in V8 Supercars had ceased,” said Barry Rogers in the statement.

“In day to day business, it (Polestar’s decision to withdraw) really doesn’t effect what we do. Nothing changes from our end.”

GRM had campaigned Holdens in the V8 Supercars Championship prior to its Volvo deal commencing in 2014.

The team currently runs two GRM-built Car of the Future Commodores in the Dunlop Series, which are owned by Dragon Motor Racing’s Tony Klein.