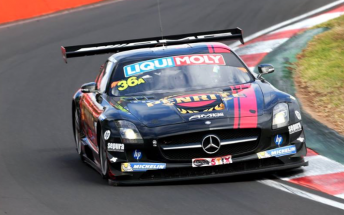 Erebus Motorsport will field a one-off entry for reigning V8 Utes champion Ryal Harris and Scott Hookey at this weekend’s third round of the Australian GT Championship.

The pair are set to pilot a Mercedes SLS AMG GT3 at Barbagallo Raceway which will utilise the entry held by Mark Griffith, who is unable to compete this weekend.

Griffith has elected to sit out this round as he continues to recover from a niggling back injury which was aggravated while racing at Phillip Island two weeks ago.

The Australian GT regular’s decision was also aided by a delay in the repair of his new Mercedes AMG GT3, which sustained chassis damage at Albert Park.

A repair is scheduled for next week having received parts from Germany.

Meanwhile, the opportunity for Harris and Hookey will see the duo make their debut in the championship.

Harris started the year competing in the V8 Utes Racing Series before encountering funding issues, which has seen him miss the last two rounds at Symmons Plains and Phillip Island.

Opening practice for the Australian GT Championship is scheduled to begin on Friday at 0910 local time.