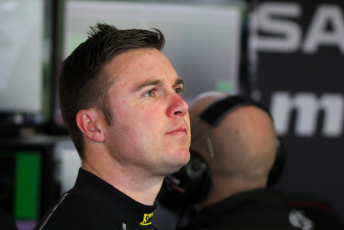 Nissan Motorsport has completed its full line-up for the Pirtek Enduro Cup, confirming that David Russell will remain with the team in its GB Galvanizing entry.

Russell has been paired with Dale Wood after two years driving alongside Rick Kelly, who as previously reported will now share with the squad’s new recruit Russell Ingall.

This year will mark the 34-year-old Russell’s sixth straight endurance campaign with the Braeside-based squad, which switched from Holden to Nissan in 2013.

Wood is currently in his first season with Nissan and sits 23rd in the standings after the first seven races.

The former Dunlop Series winner is hopeful of a strong Enduro Cup campaign alongside Russell.

“Dave has a lot of experience in the Nissan, arguably more than myself at the moment, so I think it’ll be a good fit,” said Wood.

“There’s no doubt that Dave is a fast guy, you regularly see him up near the top pace-wise of the co-drivers. It’s good that we’ve got him in the car.

“I think the cars will be particularly strong at the likes of Bathurst and the Gold Coast.

“Looking at previous years we probably haven’t been as strong as Sandown but I think that the soft tyre will really help us there.

“And I think the cars have good race pace and look after their tyres well, which are both great traits for the enduros.”

Russell joined Nissan for its Winton test last week, sampling multiple cars while running on both the hard and soft tyre.

“This year is my fourth year with Nissan Motorsport, so I understand the chassis very well and I can bring along my knowledge of the car and the trend of the car over a race weekend at these three important races,” he said.

Russell started his season with a factory Bentley drive in the Bathurst 12 Hour, but is without a full-time drive in any category.