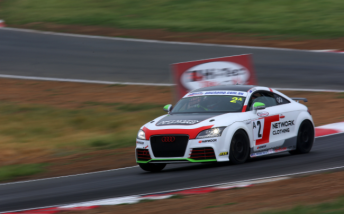 There will be two Audis on the grid this season

A total of 21 entries have already been officially lodged, headed by Sherrins’ own reigning title winning BMW 135i that he will share with brother Grant.

The category is undergoing somewhat of a rebirth for 2016 with a new name thanks to CAMS’ axing of its championship status and the introduction of a new promoter.

Last year saw the category fail to attract more than 14 cars to any of its five rounds.

“At this moment we have 21 entry forms lodged but I know of at least another five that are looking to have their entries in by the deadline,” said Sherrin.

“Then we have a number of others on top of that who are considering taking part either at round one or later in the year.

“I expect to have 25 racers on-track with us at Phillip Island and for that number to grow throughout the year. It truly is an exciting time for the APCS.”

New entries are headlined by a recently built Class A Audi TT RS for Tony Alford and Stuart Kostera, which will join Mark Eddy’s similar entry on track.

Also bolstering the field are four Suzuki Swifts built for the now defunct one-make series that are being offered by the category with ‘arrive and drive’ packages.

“The Production Invitational class is able to give those production-based entries that were built for a specific category like the Mini Challenge or one-off races like the Australian Grand Prix Celebrity Race or the Bathurst 12 Hour a permanent home,” said Sherrin.

“In the past, those racing in the Invitational class were not awarded round wins or class championship points – we have changed that so that they now can compete for class honours within the APCS.

“There are 15-20 Mini Challenge cars out there that we know of, a number of ex-GP Celebrity Race cars and a whole host of 12 hour racers.

“The potential for this class to boast up to 20 entries on its own in the future are very real as we get the word out about just who is eligible for this category that now has its own class championship.”