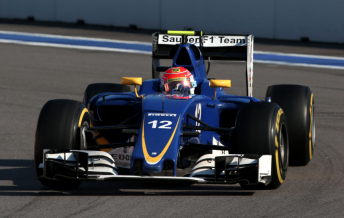 Sauber has endured a troubled start to the 2016 season

Sauber will be absent from the post Spanish Grand Prix test at Barcelona next week.

The Swiss team has announced that it will sit out the two-day hit out as it does not have any updates to develop or a young development/test driver available.

Next week’s test is one of two in-season outings earmarked for young driver evaluation.

Sauber’s announcement comes amid a turbulent time for the team which has encountered financial difficulties this season.

Team boss Monisha Kaltenborn has been trying to lure fresh sponsorship to ease its current plight.

Earlier this year the operation confirmed it was late with its payments to staff on two occasions.

The squad has also seen technical director Mark Smith leave prior to the start of the season.