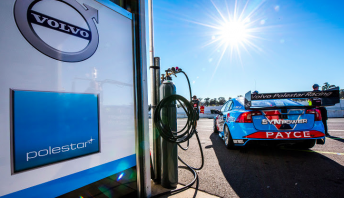 Polestar has pulled the plug on its V8 deal

Volvo Car Group’s performance and motorsport arm Polestar will not renew its V8 Supercars deal with Garry Rogers Motorsport, the company has announced.

Chief Operating Officer of Polestar, Niels Möller, said in a statement that V8 Supercars no longer fits with the company’s business objectives.

Polestar, which is responsible for motorsport activities across the Volvo Car Group worldwide, entered V8 Supercars in 2014 in a tri-party agreement with Garry Rogers Motorsport and Volvo Car Australia.

Volvo Car Australia, which is yet to respond to Speedcafe.com’s approach for comment, is not expected to continue its financial support of the team in the wake of Polestar’s global decision.

The news defies widespread expectations that Volvo would continue its factory presence in the championship.

GRM owner Garry Rogers told Speedcafe.com in the wake of the announcement that his team remains in talks with Cyan and Volvo Australia about its future and is committed to racing S60s next season regardless.

Rogers’ son Barry met with Dahl in Sweden at the weekend’s Scandanavian Touring Car Championship season opener as part of negotiations for an ongoing engine supply.

Möller stressed in his statement that Polestar will now focus its attention on other championships, which includes its recently started World Touring Car effort.

”We have enjoyed a good cooperation with Garry Rogers Motorsport and the championship organisers, but our strategy and business objectives requires us now to focus our attention to other technologies and championships in the near future,” said Möller.

”We will of course support the program in order to achieve the best possible sporting results in 2016, however, we feel it is fair to all involved that we can provide a heads-up ahead of 2017 as early as possible.

“We would like to extend our gratitude to all involved parties in the programme and wish them the very best for the future.”

“We haven’t dealt with Polestar in over nine months,” Garry Rogers told Speedcafe.com.

“We’re dealing with Cyan and Volvo as the brand here and in Sweden. Nothing has changed (in our 2017 discussions).”