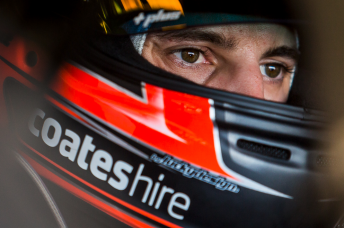 Nick Percat says he’ll be considering options both locally and internationally for 2017 as he rapidly approaches another critical career crossroads.

The 27-year-old is currently in his second season with minnow outfit Lucas Dumbrell Motorsport, which inherited the rising star after a sponsorship shortfall saw him shuffled out of Walkinshaw Racing.

Although the stint at LDM has kept Percat in the category, his career progress has fallen behind that of his fellow 2012 Dunlop Series graduates Chaz Mostert, Scott McLaughlin and Scott Pye.

Percat enjoyed a shock win in a chaotic season opening Clipsal 500 before falling back to reality as the team struggled to keep pace with the better financed squads at Symmons Plains and Phillip Island.

While McLaughlin and Pye’s futures have both hit the headlines in recent weeks, Percat is also out of contract and potentially a key player in the silly season.

Although stressing his focus on the job at hand with LDM, Percat concedes that his next move will play a key role in defining his career.

“I’m at the point in my career where the next contract is seriously important,” Percat told Speedcafe.com.

“If I don’t get a seat where I can perform, there are young guys coming through in the Dunlop Series that will quickly take those seats.

“My next contract is very important and I’ve got to make sure I’m where I want to be.” Percat and Gavin at Daytona in January

At the end of 2014, Percat elected to join LDM in favour of a program put together by Walkinshaw that would have combined GT racing in the United States and a Holden Racing Team enduro drive.

Percat has a strong link with factory GM Racing star Oliver Gavin, joining the Brit as a guest at January’s Daytona 24 Hours after driving together in the last two Pirtek Enduro Cups.

The Adelaide-raised driver concedes that he’ll consider overseas options for next year, but only if he can not land a front-running V8 Supercars seat.

“I’ll definitely have to look at it (international GT racing),” he said.

“Sometimes I wake up in the morning thinking I could have been overseas racing in a GT car and doing enduros with HRT.

“It would have been a plum drive. But there’s more I wanted to learn in V8s and I want to tick the box here first.

“I’ve always won in every category I’ve been in and I know I can win races here.

‘The easiest comparison is with Chaz, McLaughlin and Pye.

“It’s a tough pill to swallow watching all three of those guys now have success.

“I know I’m as good as them and there’s no reason why I shouldn’t be battling for championships with them.”

Encouragingly for Percat, there are no shortage of teams with drivers out-of-contract for 2017, including the likes of Walkinshaw, Brad Jones Racing, Penske, Volvo and Nissan.

Despite results proving hard to come by at LDM, Percat believes he’s currently driving better than ever and that lessons learnt off track with the small team will serve him well.

“It hasn’t done me any harm driving at Lucas’ and for me it’s probably helped with a few things off track with the way I go about it,” he said.

“There’s lots of things, like seeing how my reaction when I get out of the car has a knock-on affect within the team.

“It’s important to not drag that stuff back into the garage, which is something I worked on during last year.

“All of the thorough things you need off-track, the debrief notes, study before the rounds, I’ve just ramped all of that up in preparation for 2017.

“All of that will help if I end up at a bigger team again. It’ll make it easier.”