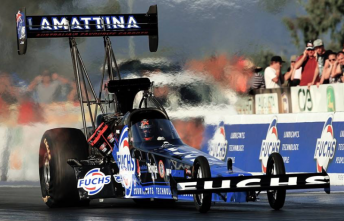 The Victorian operation will compete at the ANDRA sanctioned Nitro Up North (July 8-9) event with the team’s long-time tuner Aaron Hambridge at the wheel.

Hambridge takes over the driving duties from Phil Lamattina, who continues to recover from a horrific crash at last year’s Winternationals.

The three-time national Top Fuel champions chose to withdraw from competitive racing indefinitely in July last year a month after Lamattina sustained a shattered vertebrae in a crash at Willowbank Raceway.

However, a long standing arrangement with the Nitro Up North event’s promoter Scott MacLean has prompted the squad’s one-off comeback.

While Lamattina has personally ruled out a return to racing, he will help prepare the car and offer advice to new pilot and former crew chief Hambridge.

Lamattina has made impressive progress in his recovery almost a year on from his crash but is still unable to complete certain activities, including heavy lifting.

“This is a one-off. We are definitely not interested in competing in any championship,” Lamattina told Speedcafe.com.

“I always knew that Aaron would be behind the wheel. I’ve got no issues with him being in the car and reversing the roles.

“He knows these cars well, he knows his job well and he is a good driver too.

“Even if I felt that I wanted to (come back) I physically couldn’t so I’ve come to terms with that fact that my driving career in Top Fuel is pretty much over.

“It was never about me coming back to drive the car.

“I’m still focussed on my recovery and in a funny way this can help the healing process.

“I have adjusted my lifestyle to someone that has a back which is recovering.

“I hope I can still recover a little bit more than I have so far as I’m still restricted in a lot of things that I can’t do.”

Meanwhile, Hambridge is eagerly anticipating the opportunity to drive one of Australia’s most iconic Top Fuel racers.

“We know this car well and we know what it is capable of,” said Hambridge.

“As a team, we are going to Darwin with a good package, so I’ll have to get a handle on the driving pretty quickly.”