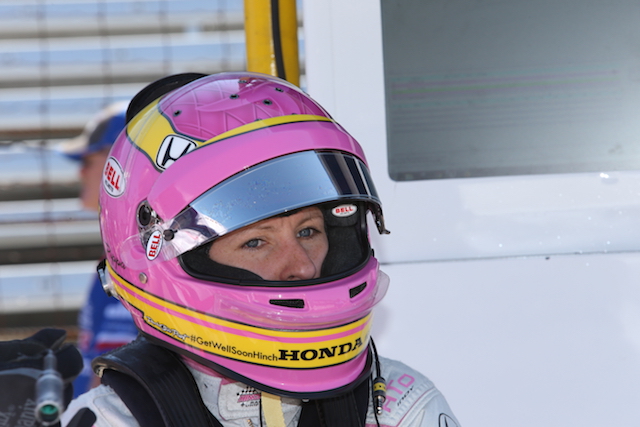 Plans for Pippa Mann to return for a fourth straight year under Dale Coyne Racing for a one-off start in the Indianapolis 500 have been confirmed.

While the final entry list is yet to be released, Mann’s position in the field means there are 33 starters ready to tackle the historic 100th running of the race.

Mann’s confirmation came as it was reported that the AFS Racing squad has aborted its plans to field a car for Colombia’s Sebastian Saavedra.

Since 2011 the English-born Mann has had a total of 13 IndyCar Series starts.

She will campaign the #63 Honda under the fundraising banner for the Susan G. Komen Breast Cancer Foundation.

“This cause is something very personal to me and to Dale Coyne Racing,” Mann said.

“While racing a pink car the past two years certainly attracts attention and awareness for Susan G. Komen, the most important part of our partnership is taking this amazing stage that is the Indianapolis 500 and using it to raise money that can actually go towards care and research.

“Over the past two years, we’ve raised over $100,000 through activities surrounding the racing program that support Komen’s mission, including the 2015 campaign, and we’re hoping to double last year’s goal this year.”

Among Mann’s six IndyCar stars last year were a pair of career-best 13th place finishes at Auto Club Speedway in California and at Pocono.

Mann will combine with Rob Ridgely who was her engineer at Dale Coyne last season.

“I’m also excited to be teaming up again with my engineer from last season, Ridge, for our first Indy 500 together,” said Mann.

Mann’s best effort at The Brickyard was 20th in her maiden year in 2011.

Her entry is the third which Dale Coyne will field in the 200-lap race alongside full-season campaigners Conor Daly and Luca Filippi.