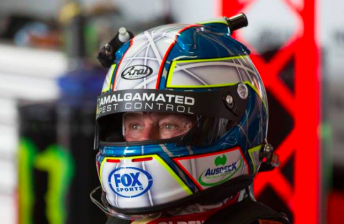 Confirmation of Ingall’s drive comes just a week after testing with the squad at Winton, which marked the veteran’s first laps behind the wheel of an Altima.

Ingall retired from full-time driving at the end of 2014, only to return with the Holden Racing Team at Sandown and Bathurst last year in place of the injured James Courtney.

He then subbed for Prodrive’s Chaz Mostert on the Gold Coast, ensuring Sandown will mark Ingall’s third marque in as many meetings.

The Fox Sports analyst says the deal with the Kellys was effectively done during last week’s test.

“It was half way through the day after the second run that it was confirmed in everyone’s mind that let’s do a deal,” Ingall said.

“Rick came up to me and said ‘What do you think?’

“I liked the car and felt comfortable in it; I got up to speed relatively easily without hanging the thing off the wall, and that was basically it.

“It was a handshake then and there, as easy as that.

“We’ve known each other and raced against each other for a number of years, I think we’ve got mutual respect for each other inside and outside the car.

“It’s great to be able to join forces in the three biggest events in the year and with a genuine chance at coming out with getting a result as well.”

Kelly, whose tally of two Bathurst 1000 victories and a championship matches that of Ingall, says the 52-year-old ticks all the key boxes for the team.

“You need to have someone in your car that’s rock solid, someone where you can sit back and know that they’re going to do a great job,” he said.

“Russell is a very fierce racer and someone who will be very solid from that point of view.

“Russell will be a huge asset to the team in terms of driving and also in just talking to us about where we’re at with the team at the moment.

“His capability to adapt to the car and gel with the guys (at the test) was quite remarkable, so from that point of view it leaves us very excited for the endurance races to come.”

Rick Kelly’s former co-driver, David Russell, was also a part of the team’s test last week and is set to be retained to drive alongside Dale Wood.