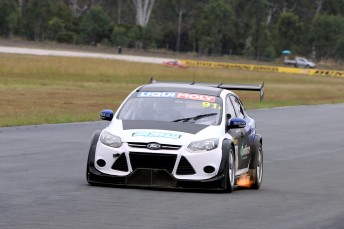 Keith Kassulke jumped back behind the wheel of the #91 MARC Focus at Queensland Raceway pic: Matthew Paul Photography

Keith Kassulke is ready to continue his racing exploits following a successful return to competition at Queensland Raceway just six months after a life threatening accident.

The Queenslander scored three podium finishes in the QR Sports & Sedans class of a Queensland Racing Drivers Championship meeting at the Ipswich circuit.

His return to racing came after he sustained severe third degree burns on the right side of his body and face when his Ascari KZ1R GT3 caught fire during a Victorian State Circuit Racing Championship round last October.

Despite a lengthy recovery from the horrific incident, the Touring Car Masters regular quickly gelled with his MARC Focus finishing third in his first race back, which he then followed up with a second place finish in Race 2.

Kassulke completed a commanding victory in the third race only to be demoted to second spot after a 30 second post-race penalty.

He then wrapped up the weekend with a fourth place in the final heat.

“It was a low-key state round which I knew but it was perfect to get back into racing,” Kassulke told Speedcafe.com. 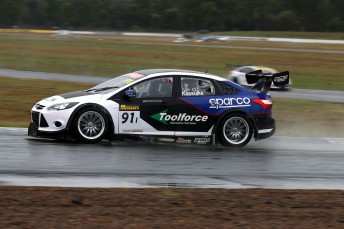 “It took me about two laps to get comfortable again. I wasn’t nervous but perhaps a little bit apprehensive.

“In the first race I was back to my reasonable lap times of 1:14s.

“I was nine tenths off my best lap there last year so I figured that was a pretty good return.

“I felt comfortable. Just getting through that was a pretty high personal achievement.

“I reckon I’m ready to move forward and do some more racing. It was great fun and a big hurdle to cross.

“I gave myself a big pat on the back. Ryan (McLeod MARC Cars Australia boss) and the crew have been so supportive. They are a great bunch of blokes to have around.

“Of course my family have given me massive support throughout the ordeal as well.”

Boosted by completing the latest chapter of his lengthy recovery, Kassulke has now firmly set his sights on competing in next month’s opening round of the Australian Endurance Championship at Phillip Island, the scene of his accident.

Kassulke has also earmarked a tilt at the Creventic Endurance Series’ Paul Ricard 24 Hour in July.

“There are a few events coming and Phillip Island will be an interesting one for obvious reasons,” added Kassulke.

“Paul Ricard is looking quite promising now that I know I am able to do it.”