Australian Briscoe and British driver Westbrook produced an impressive fuel economy run to take the maiden GTLM victory for the car less than a year since the GT first turned a wheel.

“It was a fuel-saving race from the start, because we wanted to do it on one stop, but when Richard got in, we were definitely out of the window,” Briscoe said.

“The numbers he was making were just unbelievable. I never thought we’d be able to do it and I think that actually helped look after the tyres.

“The pace was just as good as anyone’s at the end. It’s a phenomenal result.”

The Scuderia Corsa Ferrari GTE of Pier Guidi and Daniel Serra finished second ahead of the factory Porsche of Kiwi Earl Bamber and Fred Makowiecki. 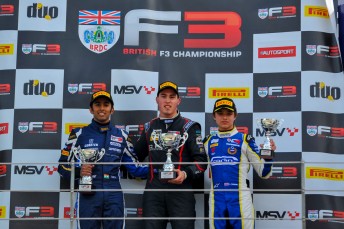 Melbourne racer Thomas Randle scored his first victory in the BRDC British Formula 3 Championship with a triumph at Rockingham.

The CAMS Jayco Australian Formula 4 graduate scythed his way through the field from fifth on the grid in Race 2 to take victory by 1.2 seconds from Ameya Vaidyanathan.

Randle’s success arrived after the heat was red flagged due to a horrific crash for Enzo Bortoleto, who walked away unscathed.

It was the first victory for an Australian in British F3 since Scott Pye’s triumph at Rockingham in 2011.

“What an awesome feeling. I woke up this morning hoping that we could get a win or a podium and I just can’t thank the guys from Douglas Motorsport enough,” said Randle.

“It’s really awesome to finally get the monkey off my back and hopefully we can get some more victories real soon.

“Every track is new and I know we have heaps of strong competition, but I will keep on pushing hard to repeat this because it’s just a great feeling.”

Randle dovetailed his victory with fourth place finishes in the opening and final races of the weekend.

Lando Norris and Ricky Collard shared the spoils in Race 1 and Race 3 respectively.

Randle is lying fourth in the championship standings just 26 points adrift of Collard ahead of series’ visit to Oulton Park from May 28-30. 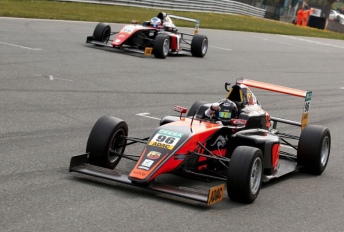 Australian Joey Mawson has opened up a 35 point lead in the German Formula 4 Championship after recording a win and two podiums finishes at the Sachsenring.

The 20-year-old began the weekend with a second place finish in the opening heat after an intense battle with Mick Schumacher, the son of seven-time Formula 1 world champion Michael Schumacher.

Mike Ortmann took the win from Mawson and Kim Schramm with Schumacher dropping to fourth.

Mawson was involved in another scrap with Van Amersfoort team-mate Schumacher in Race 2 which saw the pair touch wheels.

In the end, Ortmann took a second victory from Schumacher with Mawson 0.7s adrift in third.

Mawson saved his best until the final race as the young Aussie stormed from ninth on the grid to take victory.

The Sydney-born driver made up four positions after a aggressive start and he continued to make progress in-between three Safety Car periods.

Once he gained the lead on lap 15, Mawson controlled the race which ultimately finished under the Safety Car.

“Winning that final race was very special. It was a tough battle and I had to make the most of every opportunity, especially given the interruptions by the safety car,” said Mawson.

“I came into the weekend hoping to get some more podiums and I achieved that goal. As an added bonus I have extended my lead in the championship.”

The championship continues with a visit to the Lausitzring from June 3-5. 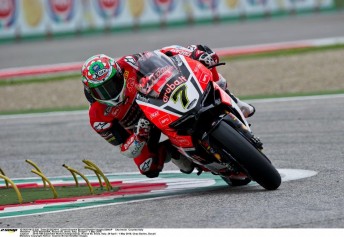 Chaz Davies on his way to a double at Imola

Chaz Davies dominated the fourth round of the World Superbike Championship with a double victory at Imola.

The Welshman charged into a healthy lead from pole position which he would maintain until the chequered flag.

The factory Kawasaki’s of Jonathan Rea and Tom Sykes were involved in a battle for the podium places with the former coming out on top.

Davies repeated the feat in the second race as he produced another dominant ride to victory from Rea and Sykes.

Australia’s Josh Brookes finished 14th and 13th respectively in the races, while countryman Josh Hook recorded a best result of 17th in the opening heat after suffering a retirement in the final encounter.

The 2014 world champion Sylvain Guintoli was ruled out of the weekend after suffering a nasty high side in qualifying.

The Frenchman was diagnosed with a concussion and a fractured ankle.

Rea’s championship lead has been cut to 35 points ahead of a visit to Malaysia’s Sepang circuit from May 13-15. 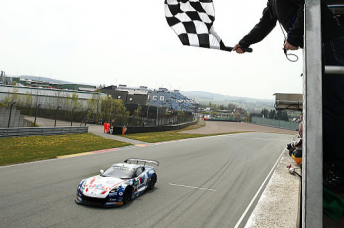 Callaway Competition takes the chequered flag at the Sachsenring

Callaway Competition and Team Zakspeed shared the honours in the second round of the ADAC GT Masters at the Sachsenring.

Sebastian Asch and Luca Ludwig emerged victorious in the opening heat as the Mercedes AMG GT3 duo took the chequered flag by 2.1s from the Land-Motorsport Audi of Christopher Mies and Connor de Phillippi.

The final place on the podium was claimed by Daniel Dobitsch and Edward Sandstorm.