The MTU colours return for Barbagallo

Roger Penske will return to the V8 Supercars paddock this weekend at Barbagallo, viewing his team in action for the first time since its expansion to two cars.

The visit is just Penske’s second to a V8 Supercar meeting since last year’s Perth round, which is a key event for the American giant’s Australian business interests.

Both cars will this weekend carry the colours of Penske brand MTU Detroit Diesel, which provides diesel engines to the mining and marine industries.

Penske had been scheduled to appear at the Clipsal 500 earlier this year before other commitments forced him to miss the event.

DJR Team Penske is still looking for its first V8 Supercars win, but has shown immense progress since its 2015 struggles reached a low point at Barbagallo.

Drivers Fabian Coulthard and Scott Pye took a podium apiece last time out at Phillip Island, where the Fords ran with backing from Pirtek.

DJRTP managing director Ryan Story says that Barbagallo marks an important weekend for the team off track as well as on.

“DJR Team Penske welcomes back MTU as the primary partner in Perth,” he said.

“Our team was very impressed with the interaction with staff and customers last year.

“The enthusiasm was fantastic and with two cars this year we hope we can deliver a strong result for MTU.

“MTU was the first of the Penske brands the team ran in 2015, and the feedback was very positive.

“The marketing around the event brings a broad range of MTU customers to the race track and we look forward to seeing many of the group in the garage over the weekend.”

Penske’s visit also comes at a time of great speculation about the squad’s plans for 2017, when current driver Scott Pye will come off contract. 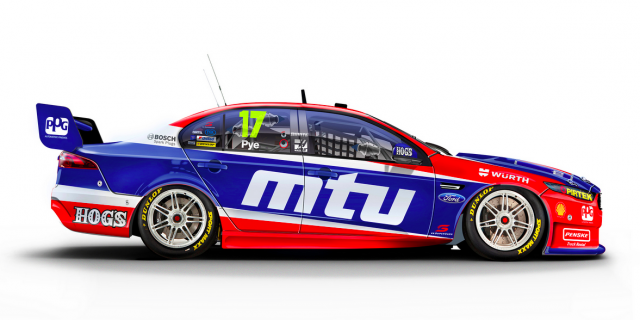 Both cars will run the blue and red scheme