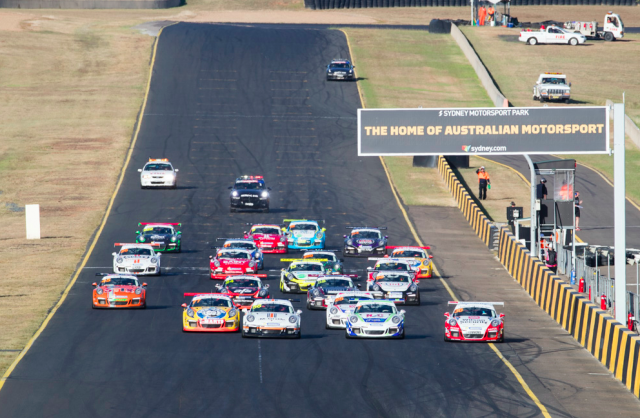 Porsche Cars Australia has signalled intentions to move its Rennsport Festival around the country following a successful second running at Sydney Motorsport Park.

The Porsche-only meeting was held for the second time at the weekend following on from an initial outing in 2013.

Approximately 300 Porsches took part this year, spread across five on track categories and a selection of static display vehicles from both the public and the factory.

A costly exercise, the event is jointly organised by Porsche’s motorsport and marketing departments and marks a major investment from the brand.

PCA public relations manager Paul Ellis says the plan is to continue to host the event on a three-year cycle, but that a change of location could be on the cards.

“Ultimately we’d like to move it around the country,” Ellis told Speedcafe.com.

“We deliberately chose to return to Sydney Motorsport Park so we could take the lessons that we had from the first Rennsport and iron out those wrinkles.

“We’ll now go away from this and decide whether we want to return and improve it further or whether we can now take the template elsewhere.

“Our ultimate desire is to take the festival to other cities so we can maximise the number of people that can attend and be a part of it.

“To have over 5,000 people in attendance at the weekend isn’t bad when there’s only one flavour of chocolate available.

“It’s a testament to the immense passion that’s out there for the Porsche brand.”

Melbourne is thought the most likely target for the next Rennsport, with the suburban Sandown venue a logical option.

Ellis stresses that motorsport is a core component of Rennsport, with the Pro-Am format for the Carrera Cup the focal point of the weekend.

The Pro-Am is expected to continue as an annual event, having featured at Shannons Nationals meeting during the past two non-Rennsport years.

Ellis is keen to keep evolving both Rennsport and the Carrera Cup, suggesting that more longer races could be added to the calendar next year.

The one-make category is facing stiff competition for amateur competitors from the booming Australian GT Championship.

“Motorsport is a critical part of Rennsport, we need to have tyre-spinning action on track,” said Ellis.

“From the feedback we’ve had the Pro-Am concept is very popular and it works to give our TAG Heuer Challenge drivers a chance at outright success.

“The Pro-Am is here to stay, but we’ll certainly look at ways to make it bigger and better.

“We’ll look at all our formats in Carrera Cup next year and think about what we can do in terms of endurance formats.

“You can’t sit on your hands in this business, we need to look at ways we can improve what we offer.”