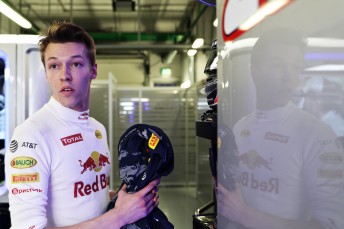 Daniil Kvyat has apologised for his mistake which caused a race ending crash for Sebastian Vettel on the opening lap of the Russian Grand Prix.

The Red Bull driver misjudged his braking point on the run to Turn 2 and hit the rear of Vettel’s Ferrari which speared him into team-mate Daniel Ricciardo.

Kvyat then made contact with the rear of the four-time world champion again as the pair entered Turn 3, which resulted in the Ferrari driver colliding with the barriers.

The Russian was hit with a 10 second stop/go penalty for causing the crash and was later issued with three penalty points on his licence.

Kvyat, who finished the race in 15th position, says he expects to receive heavy criticism for his actions.

“I didn’t expect him to slow down so much, and I started to press the brake pedal but there was no pressure left because when you lock the rear wheels, it gets out of control,” said Kvyat.

“First contact came from that, second touch I was just behind and couldn’t see what was going on ahead. He just slowed down a lot and I didn’t have time to react.

“Obviously all the mess came from me, of course it doesn’t feel great, but sometimes these things happen.

“It’s probably the messiest one that has happened in my career but usually I learn from it and it should be all fine next time.

“I apologised to everyone who was involved, and yeah, we will learn from it.

“We will talk our points of view, of course it’s easy now to attack me and I guess everyone will but I’m ok with that.”

Vettel was left fuming in the immediate aftermath of the incident which was the second clash with Kvyat in as many races.

The Ferrari driver was seen talking to Red Bull boss Christian Horner about the collision during the race.

“It was fairly clear (what happened) – I just saw the footage,” said Vettel.

“I got a bit hit to spin in Turn 2 and I got a huge hit which turned me around at Turn 3, and I couldn’t avoid hitting the barriers.

“I don’t dislike him (Kvyat), I think he made a mistake two weeks ago, he did a mistake today. It is fairly obvious but it doesn’t help me out because I am not in the race.”

Horner, who apologised to Vettel, felt the incident robbed his team of solid points as the clash also ruined Ricciardo’s race.

The Australian sustained damage to his car and was left to fight his way through the field twice to finish in 11th position.

“Obviously he was slightly frustrated, all I could do was apologise, because this week it was unfortunately a mistake by Daniil Kvyat,” said Horner.

“The emotions run high with all these guys. At his home race, I think he’s just gone for too much too soon.

“We’ve seen so many incidents down there before. He’s just misjudged it.

“From a team point of view, it screwed our race completely, we could have scored sensible points today. We’ve given away a lot of points.”