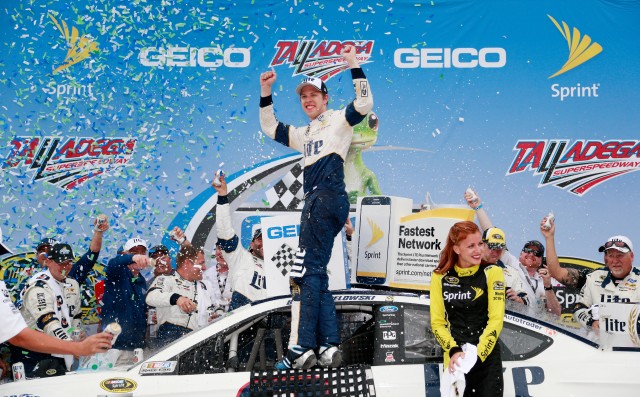 For the second time in 2016 Keselowski celebrates in Victory Lane

Brad Keselowski’s plan of staying up the front has paid off with the Penske Ford driver winning for the fourth time at Talladega.

In a race that featured four multi-car major crashes, including one as the field came to the chequered flag, Keselowski completed the race with a near perfect car after 500 miles of pedal-to-the-floor racing.

Importantly on the final restart on lap 186 of 188, Keselowski was able to power past Kurt Busch as the fighting cars behind wrecked on the front stretch.

“The last three or four restarts before that, the high lane had went, and as the leader a lot of it is out of your control,” said Keselowski.

“You need the cars behind you to push and a couple of them they did and a couple they didn’t. That’s just part of racing, and there was nobody at fault with that.

“We actually lost the lead and got a better run. Jamie McMurray behind me gave me a great push, and then Kyle Busch gave me a push that was big to clear the 41 (Kurt Busch), and without those two I couldn’t have made it to the front.

“So thank you to them. It’s Talladega. This is my fourth win here. I never thought I’d win at Talladega four times, and I’m super-pumped. This is awesome.”

In claiming the 19th victory of his career, Keselowski became the fourth two-time winner in the Sprint Cup series this season.

The race ended under caution, with Kyle Busch in second place and Austin Dillon in third as the survivor of two early crashes.

Jamie McMurray ran fourth, one spot ahead of polesitter Chase Elliott, who worked his way up from ninth to fifth after the final restart.

After Tony Stewart started his car, he handed over to Ty Dillon at the first caution. It proved a wise move as the #14 Chevy finished sixth. Stewart will be credited with the points.

In terms of the big crashes, the biggest on Lap 161 involved 21 cars. Kurt Busch ignited that accident by tapping Jimmie Johnson into Paul Menard.

On lap 181, a 12-car chain-reaction incident took out Matt Kenseth and Danica Patrick amongst others.

On Lap 96, Chris Buescher took the brunt of a seven-car crash that ended with Buescher barrel-rolling three times after contact from Michael Annett.

On lap 50 Dale Earnhardt Jr. lost control of his #88 Chevrolet and wiped out Hendrick Motorsports team-mate Kasey Kahne. That came after his steering wheel came off at speed. In-car footage showed him frantically putting it back on.

Earnhardt returned to the race only to be ridden into the Turn 1 wall when Carl Edwards’ damaged Toyota blew a right front tire and shot up the track into Earnhardt’s path.