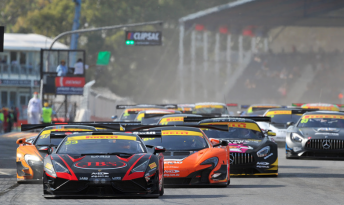 Australian GT will return to action at Perth

Australian GT has confirmed a 21 car grid for the championship’s first visit to Perth’s Barbagallo Raceway this weekend.

The field is headlined by Walkinshaw Racing who will debut a brand new Porsche 911 GT3 R in the championship.

Experienced sportscar ace John Martin is set to pilot the entry alongside a yet-to-be revealed co-driver for the team’s maiden event.

The Queenslander tested the Porsche at Winton last week ahead of its first public appearance at the Rennsport Festival.

Martin is not the only internationally renowned driver on the grid with Audi LMP1 ace Marco Bonanomi set to pilot the Jaemc Pem Racing Audi R8 as a replacement for reigning champion Christopher Mies.

Mies is unable to compete due to a clash with the Blancpain GT sprint series at Brands Hatch which sees the Italian pair up with Geoff Emery.

Championship owner Tony Quinn returns in his new Aston Martin Vantage, while Clipsal winner Roger Lago will be back on the grid in his repaired Lamborghini after a heavy shunt at Albert Park.

Lamborghini will also be represented by Western Australian Peter Rullo and the Andrew Taplin/Dean Canto entry.

A pair of Mercedes AMG GT3s will feature in the hands of Mark Griffith and the Scott Taylor Motorsport duo of Craig Baird and Scott Taylor.

Meanwhile, the Team SRM BMW M6 returns for its third event with Steven Richards and Max Twigg set to do battle.

Ricky Capo also continues his Australian GT campaign behind the wheel of a BMW Z4 GT3.

After returning to the category at the Australian Grand Prix, Andrew and George Miedecke are back in their Matt Stone Racing prepared Aston Martin.

Notable absentees include Maranello Motorsport who have chosen to focus its efforts on the Australian Endurance Championship which begins at Phillip Island on May 29.

The Ferrari outfit elected to miss the opening round at the Clipsal 500 but chose to debut its new 488 GT3 at Albert Park.

Practice for the third round of the championship is scheduled to begin on Friday at 0910 local time.