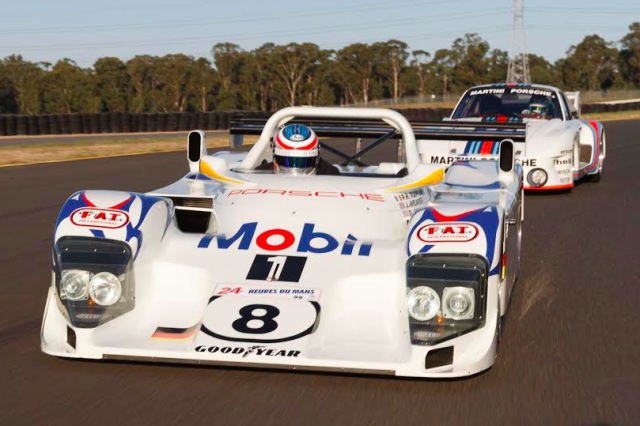 Davison aboard the LMP1-98 at SMP

While the Carrera Cup headlines the racing action at Rennsport, a pair of Le Mans classics from Porsche’s Weissach museum are arguably the event’s star attractions.

Porsche has shipped a 1977 935-77 Coupe and a 1998 Porsche LMP1-98 to Australia especially for the Sydney Motorsport Park Rennsport Festival.

The cars are taking to the track for hot lap sessions in the hands of Carrera Cup Driving Standards Advisor Craig Baird and category front-runner Alex Davison.

Both cars are sister chassis to Le Mans winning Porsches, with a latter version of the 935 model tasting victory in 1979 and variants of the Joest-run LMP1s finding success in 1996 and 1997.

Presented in the 3.2 litre flat-six specification in which it competed in 1998, the latter car is undoubtedly the fastest Porsche at Rennsport this year.

Davison has driven a variety of Porsche’s museum cars during his long association with the marque and says that the Sydney laps have proven highly enjoyable.

“The LMP1-98 is an amazing car and the best thing is that that car is prepared so well in Weissach that you can really have a good go,” Davison told Speedcafe.com.

“For me it’s really enjoyable to drive something with some downforce. Throughout my career I didn’t do wings-and-slicks open-wheelers, so it’s great to get a taste of it every now and then.

“The first thing I noticed is that it’s got a lot of power and being turbocharged, it’s obviously got a bit of lag and then when it’s on it goes like hell.

“When the tyres are cold it spins the wheels in fourth gear. It’s very powerful for such a light car.”

Along with the petrol engine drivetrain, Davison says that the car’s simple nature is a far cry from that seen in modern sportscar racing.

“There’s no power steering so when you get the tyre temps up and are having a go, in the fast corners it’s really heavy,” he said.

“Doing a 24 hour race in a car like that would be very hard work.

“It’s designed for Le Mans, so even though the downforce is more than I’m used to, there’s not huge amounts of grip in the slow corners.

“But by the end of the front straight here it’s just getting wound up. It’s still pulling very hard when you have to go for the brakes.”

The Rennsport Festival concludes today with another full day of track action.