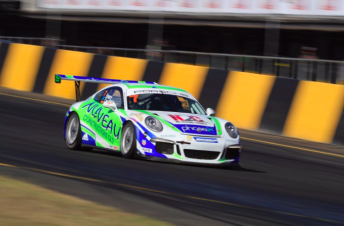 Matt Campbell and Geoff Emery completed their domination of the Carrera Cup’s Rennsport Pro-Am with victory in the second 34 lap contest.

The McElrea entry fell to a low of ninth by the time the pit window opened at the 25 minute mark as those starting their Pro drivers surged to the front.

When the pitstops finished 10 minutes later, Campbell was placed fourth and just 15 seconds adrift of leader Tony Bates, who had taken over his entry from Reynolds.

Campbell swept to the lead with eight laps still to run, subsequently controlling a Safety Car restart with two laps to go in order to take a double victory.

The result came much to the delight of co-driver Emery, who set up the win with his calculated stint.

“I was thinking of Matty’s championship the whole race,” said Emery.

“The V8 boys were getting a bit impatient there. I held them up as long as I could but when it was time to roll over I rolled over.

“After that I just kept pressing on trying to keep the lap times up so that Matty could jump in and do his thing.”

The late yellow was called after a clash between James Abela and Jake Camilleri saw the former’s Porsche stranded against the inside wall at Turn 4.

Bunching the field proved a bonus for those to have run their Pro drivers second as the order shuffled greatly in the final two laps.

Max Twigg and Bates sat second and third at the restart thanks to strong early stints from Ash Walsh and Reynolds, but fell to fifth and 11th respectively by the flag.

Bates’ chances had been hurt by a five second post-race penalty for co-driver Reynolds rolling moments prior to the start.

Nick McBride capitalised on strong early work from co-driver Dylan Thomas to move up to an eventual second ahead of a charging Nick Percat and Shane van Gisbergen.

The two V8 stars had been sixth and ninth respectively at the restart before cutting their way through the order.

Ross was forced to serve a drive-through penalty early in his stint after co-driver Ryan had spun and collected a hapless Walter at Turn 2 in the early going.

Campbell’s Sydney success has seen him take the lead in the championship standings ahead of Round 4 at Hidden Valley on June 17-19.