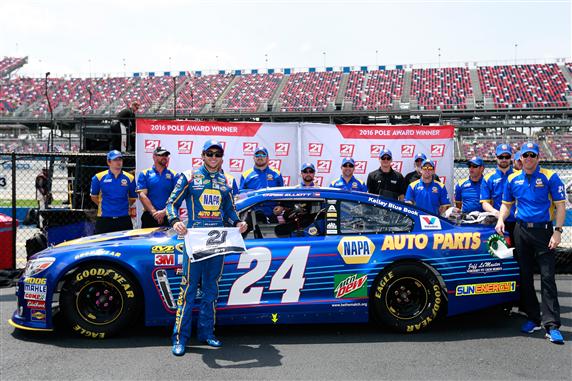 Second-generation racer Chase Elliott has once again shown his prowess for restrictor plate qualifying with pole position at Talladega Superspeedway.

The pole came 30 years after Elliott’s father, Bill Elliott, earned the top starting spot at with a lap at 341.550km/h (212.229 mph), before restrictor plates were introduced at the superspeedways.

“This is definitely a special place,” said Elliott.

“It’s cool to get it done today. This is a team effort, and those guys and everybody at the No. 5 and No. 24 shop, in particular, and everybody at Hendrick Motorsports and the Hendrick engine department and obviously (sponsor) NAPA Auto parts.

“But, man, this is cool. Those guys do such a good job. And as I said in Daytona, this had nothing to do with me. This is the car that we had. This is the same car we had in Daytona. They brought another fast one here.”

Alongside on the front row will be fellow youngster Austin Dillon, while behind will be Dale Earnhardt Jr. Matt Kenseth.

Ty Dillon qualified Tony Stewart’s Chevy in 14th starting spot, but Stewart will start Sunday’s race and will have to drop to the rear for the green flag because of the driver change. The plan is for Stewart, who is still in the midst of recovering from a back injury, to turn the car over to Dillon during the first caution of the race. Stewart will still earn the points for the championship.

Josh Wise was the only driver who failed to make the 40-car field.