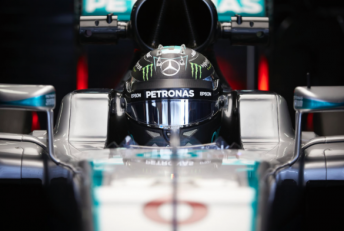 Nico Rosberg enjoyed a relatively comfortable run to pole position for the Russian Grand Prix as an engine failure ruled Lewis Hamilton out of the final segment of qualifying.

The dominant Mercedes duo were set to do battle for pole before a turbo charger failure struck Hamilton’s W07 at the end of Q2.

The time set on his first run proved enough to secure pole while Vettel remained in second.

However, a five place grid penalty for a gearbox change will see the four-time world champion drop to seventh.

As a result, Williams’ Valtteri Bottas will join Rosberg on the front row, with Ferrari’s Kimi Raikkonen and the sister Williams of Felipe Massa set to start third and fourth.

Hamilton is expected to start from 10th on the grid following his mechanical failure, which Mercedes claim to be a reoccurrence of the issue he suffered in China.

The Brit was also due to see the stewards after the session for failing to obey guidelines for rejoining the track after running wide at Turn 2.

“This is the second engine that I took from the last race and it’s the same failure as I had in the last race,” said Hamilton.

“I just went back out in Q2 at the end to get a feel for the lap and I lost the same power as I lost in China.

Toro Rosso’s Carlos Sainz narrowly missed out on a spot in Q3 having been pipped by Kvyat in the dying moments of Q2.

McLaren were contenders to make the final part of qualifying but in the end Jenson Button and Fernando Alonso had to settle for 12th and 14th on the grid.

Button and Alonso sandwiched the Force India of Nico Hulkenberg, while Haas F1 locked out the eighth row with Romain Grosjean and Esteban Gutierrez.

Renault continued to struggle for pace with Kevin Magnussen and Jolyon Palmer failing to progress from Q1.

Sunday’s Russian Grand Prix is scheduled to begin at 2200 AEST.