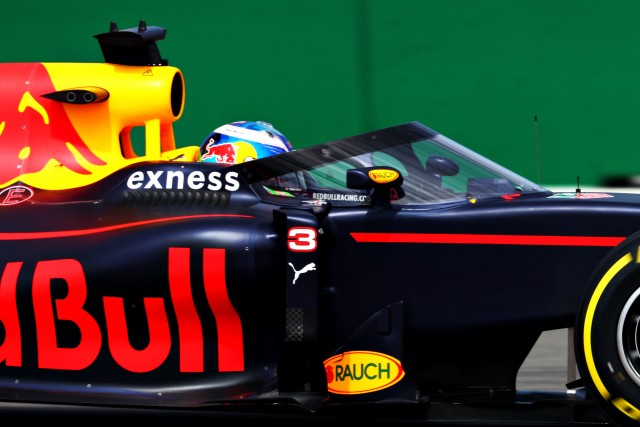 Red Bull’s ‘aeroscreen’ made its debut in Friday practice

The Red Bull driver completed a solitary installation lap of the Sochi Autodrom with the ‘aeroscreen’ canopy fitted to the cockpit of his RB12.

The ‘aeroscreen’ is an alternative cockpit safety concept to the Mercedes and Ferrari designed Halo device, which was trialled in pre-season testing.

Ricciardo claimed his vision was not affected by the screen but admitted it would take some time to adapt to if implemented in the future.

“I think in terms of visibility it was actually pretty good,” Ricciardo told Sky Sports F1

“The peripheral vision was fine to be honest. Where the structure is built is in line with the mirrors so you are not hindered anymore than you are now.

“It is a bit weird having a structure, so that is something you have got to get used to.

“What you see seems pretty much unaltered so I think that was a positive.

“Sure it is different but the crux of it was pretty good.”

Red Bull boss Christian Horner felt the trial proved the concept is much more aesthetically pleasing than the Halo.

“It is a lot more racy than the Halo looked when we saw that in pre-season and the comments from Daniel were quite positive,” Horner told Sky Sports F1.

“Formula 1 is open cockpit racing but it is inevitable that something is going to happen in terms of the FIA pursuing this route of head protection in the event of a full frontal accident.

“If the FIA are going to pursue this then hopefully our concept is a more elegant solution compared to the Halo.”

Ricciardo appears set for another strong weekend having emerged fifth fastest overall at the end of Friday practice.