IndyCar to seek replacement for Boston

IndyCar to seek replacement for Boston 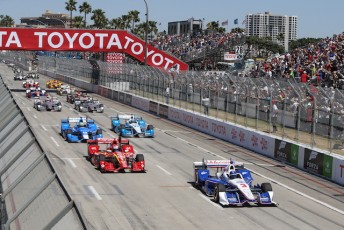 Boston was set to be the fourth street race along with St Petersburg, Long Beach (pictured) and Detroit in the 2016 IndyCar Series

IndyCar is expected to explore replacement venues after promoters of the proposed Boston street race said they could no longer proceed with the event.

Boston was set to stage its inaugural race on a street course in the city from September 2-4, the penultimate round of the Verizon IndyCar Series.

John Casey, president of the Grand Prix of Boston said the relationship with city officials had become untenable.

On hearing of the development, IndyCar issued a brief statement saying it was too early to comment however it is understood the series will explore two options in the north-east region of the US.

“The relationship between us and the city is not working,” Casey told the Boston Globe.

“The relationship is untenable.”

A deal was signed with the city last year for the inaugural event in September and for a further four years from 2017.

Casey has said that there are two venues in the region which have said they are capable of replacing the still-born Boston race.

Boston had been planned two weeks ahead of the series finale at Sonoma and would have been the fourth street course in the 15-round series.