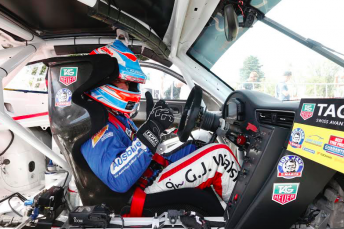 Ash Walsh set the early pace at the Carrera Cup’s Rennsport Pro-Am in an opening practice session that included a high speed off for co-driver Max Twigg.

Former V8 Supercars full-timer Walsh put his Sonic Motor Racing Services Porsche at the top of the order during the early going with a 1:30.76s best around the Sydney Motorsport Park circuit.

He then watched on from the garage as co-driver Twigg triggered a red flag seven minutes from the end with a high-speed off at Turn 1.

The Bob Jane T-Marts Porsche was extracted from the gravel undamaged under red flag conditions, in a stoppage which saw the half hour session extended by five minutes.

“It’s reasonably cool here this morning so there was a good amount of grip, even on the used tyre,” Walsh told Speedcafe.com.

“The key today is going to be being quick on the green tyre and giving the co-drivers as many laps as possible.

“We’ve been trying to push Max into braking a little later into Turn 1 and it’s caught him out.

“But it’s all about getting him out of his comfort zone a bit so by the time it matters he’s on the pace.”

Walsh says he’s been looking forward to the Pro-Am format, which sees seven of his former V8 Supercars colleagues join the field.

“It’s a massive attraction for me,” he said of racing against the V8 stars.

“I felt leaving V8 Supercars that I didn’t get the best opportunity to show my full potential and I really want to do a good job this weekend to show what I can do.

“We’ve had a bit of a rough run during the year so far, but hopefully we’re in for a good weekend.”

Shane van Gisbergen was the fastest of the guest drivers in third aboard the one-off Scott Taylor Motorsport entry he’s sharing with countryman Paul Kelly.

“I just did five or six laps to get a feel for the car before chucking Paul in,” van Gisbergen told Speedcafe.com.

“I’d not even sat in the car until yesterday, so it was good to get a feel for it.

“I got back from Europe on Wednesday (following the Blancpain Endurance Series race at Monza), but I’m feeling rested and pretty good. It’s great to be driving every week.”

The Pro and Am drivers will each have their own 30 minute practice sessions this afternoon.