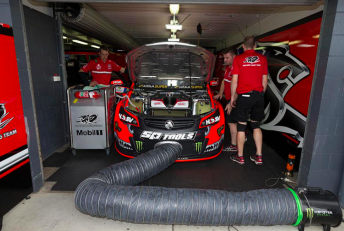 V8 Supercars continues to work on its post-V8 future

V8 Supercars will outline a vision for new regulations in 2022 as soon as this July amid ongoing efforts to attract manufacturer investment in the sport.

Work has already been taking place behind-the-scenes this year on a ‘Gen3’ concept, which will come into effect from 2022.

V8 Supercars CEO James Warburton has told Speedcafe.com that an internally devised outline of the plan is nearing completion, ready for input from the Commission and team owners.

Mooting July’s Townsville 400 as a likely release date, the unveil would come just 12 months after the category’s 2017 Gen2 outline was presented to teams and media.

While Gen2 opens up the possibility of non-V8 engines and two-door bodyshapes, it utilises the existing chassis and control components.

The concept has so far failed to draw a firm commitment from the current manufacturers, nor attract any new brands to the sport.

Admitting that there will be no new marques or engine configurations on the grid next year, Warburton argues that revealing a longer term direction for the category is a vital step.

“New manufacturers coming in are looking at quite a small window,” Warburton told Speedcafe.com.

“So the Gen3 piece of work is the thing that’s going to be crucial for the new manufacturers that we’re talking with to look at a longer run-up.

“Where things are at with manufacturer discussions, as soon as we get the Gen3 there I think it can be very clear.”

“As soon as we can,” he added when asked of when it will be formalised.

“We’re talking about our 2025 vision being ready in draft form for Townsville and I think that the Gen3, we’ve certainly got top level direction and considerations prepared.

“It’s now something that will take some time with the Commission and team owners that we’ll work through around the Townsville time frame.”

While Gen3 is said to involve a ‘clean sheet of paper’, it remains unclear what format the new rules will take as the category aims to achieve relevance for manufacturers in an increasingly fragmented new car market.

Alongside Gen3, Warburton refers to “moving from a category to more of a holistic sport” as part of an overall 2025 business plan.

Its Supercars Events arm took over the Bathurst 12 Hour last year, while the business has also taken control of the V8 Utes in 2016.

The 12 Hour deal connects the company to a plethora of brands currently involved in GT3 racing, which is booming throughout the world.

Warburton says that this week’s announcement that the term ‘V8’ will be dropped from the V8 Supercars Championship name from July 1 is the first step towards the future.

“Supercars (the name) opens up the garage to look at other categories and other things we can do under the banner as well,” he said.

Developing the Gen3 outline has taken precedence for V8 Supercars over completing its own V6 turbo prototype engine and testing it in its Holden Car of the Future prototype.

The track testing program was meant to get underway as soon as last September, but has been the subject of continued delays.

“It’s just time… but it’s in our interest to get that out as soon as we can and give the fans a chance to hear how it sounds,” said Warburton of the project.

Despite a lack of uptake on Gen2, Warburton is hopeful that the three existing manufacturers – Holden, Nissan and Volvo – will all continue to be involved with their current platforms next year.

Volvo is poised to confirm an extension with Garry Rogers Motorsport, while Holden and Nissan continue to discuss their positions with global management.

“I think we’ve done everything we can with all of those manufacturers,” said Warburton.

“Yes I am (confident they will all continue), but it’s not my decision.

“You never know what might happen at a global level, but I’m confident the field will be pretty much as is going into next year.

“I think from there ’18 might see a little bit of change, but even then the existing manufacturers have talked about using the V8 powerplant longer.”