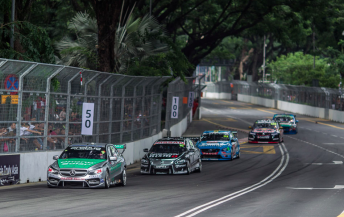 Having sent a five-car demonstration to the inaugural KL street race last year, the Australian category is scheduled to complete a full championship event in the city on August 12-14.

Legal documents have this week revealed, however, that City Motorsports does not currently have an agreement with KL City Hall to run the event.

Citing a KL City Hall affidavit, local newspaper The Edge Malaysia reports that no fresh agreement to host the event will be struck while legal action with GT Global remains ongoing.

The legal action was brought about by two of GT Global’s directors, who allege that a string of parties including City Motorsports and KL City Hall conspired to wrest control of the company and its RM600m (AUD$200m) contract to hold the event.

City Motorsports is headed up by Faizal Moulana, the chief operating officer of GT Global.

V8 Supercars signed its own agreement with City Motorsports earlier this year, subsequently hosting Faizal and associates at the Clipsal 500 Adelaide.

V8 Supercars CEO James Warburton told Speedcafe.com that the championship is working with Faizal to make sure the event goes ahead but continues to wait on the outcome of the legal dispute.

“The legal activity is beyond our control and we just have to let that run its course,” Warburton told Speedcafe.com.

“Everyone has read reports that are from one side of the ledger, from the aggrieved party, and we’ve got to look at our due diligence and rely on the promoter.

“What I’ve clearly said is that there will come a time when it’s not possible to build the track.

“We’ve got iEDM, which builds all of our tracks, over there and we’ve got Phil Shaw from our events department working with City Motorsports.

“There will become a time when the event is not possible, but we are not at that point yet.

“We absolutely plan to be there August 12 to 14 and if there are any changes to that we’ll advise our teams and fans as soon as possible.

“But at this point in time the race is on.”

Warburton has meanwhile denied a report last week that the championship has completed a deal to race at the Dubai Autodrome in the United Arab Emirates from next year.

“We’ve been talking to Dubai and we’d love to race at the Dubai Autodrome, but there’s no impending announcement,” he said.

“As we’ve consistently said there’s one race (outside Australasia) in 2016, we’re chasing two in 2017 and Asia continues to be the focus for that.

“There’s not the funding there at the Autodrome to have a race up at any time in the foreseeable future.”