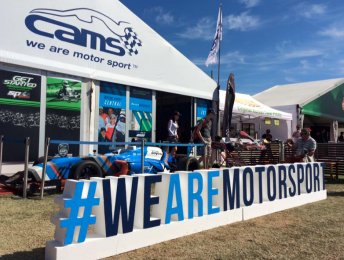 The Confederation of Australian Motor Sport (CAMS) is reporting record monetary growth for the 2015 calendar year despite a $2 million investment in Formula 4.

The Australian motorsport governing body has revealed exclusively to Speedcafe.com its financial report which sees the total revenue exceed $20 million for the first time.

The overall revenue represents a jump of $2.5 million compared to 2014, which has been attributed to increased commercial activities.

This growth arrives in a year where it has made significant investments in Formula 4 and when it has acquired the Shannons Nationals series.

Amid widespread criticism for its $1.6 million investment in purchasing 20 F4 cars, the organisation has reported a deficit of approximately $400,000 for the championship’s inaugural season.

CAMS says the deficit is offset by an annual $300,000 grant from the federal government earmarked for driver development.

Comfortable with CAMS’ overall growth, chief executive Eugene Arocca stands by the F4 program and is happy to continue to run the category at a loss as it pursues its driver development push.

“These are the strongest (revenue) figures we have ever posted. They are record numbers year-on-year,” Arocca told Speedcafe.com.

“CAMS is healthy. We are running the organisation financially responsibly. We are growing the sport and we are getting more and more government support for what we are doing.

“When you include the depreciation of those (F4 cars) which has been included in our 2015 results, the notion that we have expended members’ money without logic is completely false.

“If you add everything up on the plus side, including corporate sponsorship, entry fees, championship fees, lease fees and the outgoings, which include the prize money and the expense of putting on the category, it was a $400,000 deficit.

“That is before you factor in the $300,000 funding we received from the Federal Government.

“We will continue (to invest in F4) and if we had more we would invest more.

“When you look at it all we are spending less than five percent of CAMS’ parent revenue on driver development.”

While CAMS’ total revenue has doubled since 2012, the body also claims that it has cash reserves in excess of $4 million.

Meanwhile, since purchasing the remaining 50 percent of the Shannons Nationals last year, the series has been earmarked as one of CAMS’ growing revenue streams.

In 2015 the Shannons Nationals and Rally Australia provided a combined 36 percent of CAMS’ overall revenue, with a further 20 percent coming from membership products, including licences and club affiliations.

While Rally Australia only has a contract until the end of 2017, Arocca remains confident a hypothetical loss of the event in the future would not pose an big affect to finances.

“We are set up in a way that if it did not proceed we will just simply pull back the group revenue and manage the organisation going forward like we have the previous 60 years, which is responsibly and carefully.”

The report also reveals that a further seven percent of its revenue is generated from grants from the Federal and State governments and the FIA.

Last year $1.4 million was received which has been labelled as a stable figure to expect in the future.

The organisation says it has recently renewed its multi-year grant arrangements with state governments from Victoria, South Australia, Western Australia, Tasmania and Queensland.

The CAMS 2015 financial report is set to be published within the next month.