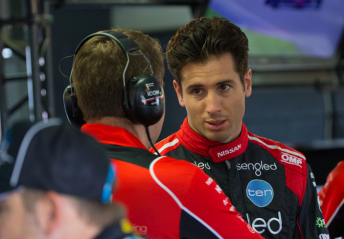 Nissan Motorsport has been left to investigate its power steering system after a failure-induced crash cut short testing at Winton.

Rick Kelly’s Sengled Altima made significant front-on contact with the tyre wall at the exit of Turn 2 during yesterday’s test after a power steering pump seized.

A similar issue earlier in the day had fired Kelly off the road at the final corner in an incident which also cost the former champion track time.

The Turn 2 crash required Kelly’s car to be trucked back to the pits, with the team electing to minimise running on its other three cars during the late afternoon for fear of another accident.

“It was a reasonably large argument with the wall,” Kelly told Speedcafe.com of his crash.

“The pump seized just as I got to 100 percent throttle which sent me straight into the fence.

“The steering assist is obviously massive and as soon as it fails it pulls the wheel straight and you’ve really got to try and fight it to get the car to turn again.

“By that time you’re well and truly in the fence.”

Although unsure as to why the failures occurred, Kelly is confident the team can resolve the issue before the upcoming Perth Super Sprint.

“We’re still dissecting what happened, but we weren’t doing anything strange because we hadn’t had any dramas with our steering before that,” he said.

“I don’t think it’ll be replicated in Perth but we’re all looking into it. It’s better that it happened at a test day than a race meeting.”

Despite the crash, Kelly was upbeat about his day, which was largely focussed around back-to-back testing of set-ups developed with engineer George Commins over recent events.

Following its resurface over summer, track grip was predictably high, leading to fast times for all four teams present.

“It was the fastest I’ve ever been around the place and the most damage I’ve ever done at a test day,” surmised Kelly.

As previously reported, Russell Ingall turned laps in Kelly’s Altima as part of the test in a move that the team says was designed to provide fresh feedback for its ongoing development.

Although Ingall is thought to be in the frame for a Pirtek Enduro Cup seat with the team, Kelly is cagey on the prospect of signing the veteran.

“It’s not something we’ve had a lot of dialogue on but he’d be an asset to the team if we could get him,” he said.

Stressing that Ingall’s other commitments and commercial factors are all to be considered, Kelly is fully of praise for his fellow two-time Bathurst winner’s efforts on Tuesday.

“Yesterday we didn’t know what to expect after he’d only done three races last year, but he came up to speed pretty quickly in a car that he’s never driven and on a surface that’s pretty different to what we’ve experienced there before.

“We’ll see how the dust settles and go from there. But certainly for us it was enjoyable to have him as part of the team.”