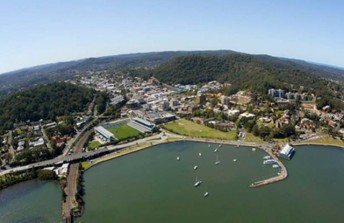 Gosford City Council is predicting that a favourable outcome from the New South Wales government will see it become the new host for the final V8 Supercars round from 2017.

The Central Coast city is closing in on final confirmation that it will become the replacement for the Sydney Olympic Park event that has been the series finale since 2009.

Following several positive meetings with V8 Supercars, Council CEO Paul Anderson says the proposal for a ‘multi-year’ deal to host a street race in the city has been completed and is now awaiting a final decision.

Having addressed concerns regarding the circuit design, which has undergone significant changes since the initial draft, Anderson expects a response from the government within the next month.

It has previously been reported that the street circuit will be approximately 3.5km in length and incorporate elements of the city’s waterfront.

“We are quietly confident,” Anderson told Speedcafe.com of the chances the event will be given the green light.

“We are at the point where we have a got a track that has been designed (and) we have some understandings of what a budget would be.

“We have just recently written to New South Wales government to say we have got to this point and asked how we can proceed.

“Now we are hoping that Destination New South Wales, the Minister for Tourism, the Premier, the member for Terrigal, the parliamentary secretary for the Central Coast all support the process financially and publicly as much as what they have done to us privately.

“It would just be one of those moment defining historic event in the growth and development of the Central Coast.”

While the full details of the proposed circuit are yet to be revealed, Anderson says that track will show off the city and be spectator friendly.

“We have gone through a stack of those issues (that were raised by the initial decision),” added Anderson.

“We have worked collectively and cooperatively to be in a position to seek that government commitment and away we go.

“There were a number of issues some of those related to access through the city in and around the event.

“We also had to make sure we had a track that best shows off the city and its assets as well as giving spectators a really good view and a good experience of V8 Supercars racing.”

When approached by Speedcafe.com, V8 Supercars declined to comment on the current status of the proposed race.

V8 Supercars have previously been in discussions with Geelong’s local government in Victoria regarding a street race in the city, however those plans received a jolt recently when the local council were sacked by the state government.