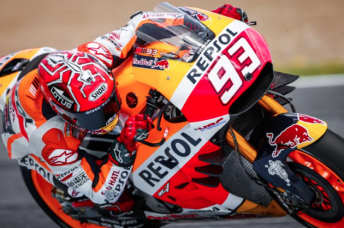 The introduction of winglets has dominated the headlines this season which has led to criticism from some riders calling for them to be banned under safety grounds.

Initially debuted by Ducati last year, the Italian manufacturer along with Honda and Yamaha has fitted winglets to the fairings of their MotoGP machines in a bid to decrease lap times.

Honda trialled a newly designed three-way winglet during Monday’s Jerez test, while Suzuki also ran a version of the component for the first time.

With more teams adopting the devices, Marquez, who topped the times during the test, believes winglet development is going to dominate the season with further gains to be achieved.

“The most striking thing for people was our testing of three different winglets,” said Marquez.

“The aerodynamic side of things had a lot of untapped potential; now that this has been opened up, we can work a lot on this aspect because there seems to be no limit to what you can do with it.”

Spanish Grand Prix winner Valentino Rossi was fourth ahead of Honda’s Dani Pedrosa and the sister Suzuki of Aleix Espargaro.

Meanwhile, Australia’s Jack Miller, riding for Marc VDS Honda, enjoyed a productive day in 14th position, which has left him confident the team has made some improvements.

The Townsville rider returned to competitive action in Sunday’s Spanish Grand Prix after sustaining a broken foot during a crash at the Austin round.

“We found some steps to get more comfortable and faster without any incidents so it was a positive day,” said Miller.

“With my right ankle still healing it was important to get through the race weekend and this test without a crash, and be stronger for the race at Le Mans.

“I struggled a little more in the afternoon with the hotter track conditions so we need to understand why I’m faster when the track temperature is cooler.

“I’m really happy after missing some pre-season testing and the race in Texas especially to understand the latest Michelin front tyres, they help with turning and to finish off the corner.”