Holdsworth searching for consistency at Winton 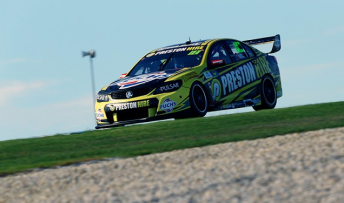 Lee Holdsworth says there are plenty of items to tick off the list as Team 18 undertakes its second test day at Winton today following a mixed start to the season.

Team 18 is set to join Nissan Motorsport, the Holden Racing Team and Garry Rogers Motorsport at the rural Victorian circuit as the quartet seek improvements prior to next week’s visit to Perth’s Barbagallo Raceway.

The single car outfit, run by businessman Charlie Schwerkolt, is the newest on the grid following a decision to form a new team in Melbourne after a split from Walkinshaw Racing last year.

Equipped with an ex-Triple Eight Commodore for driver Holdsworth, the squad has been struggling for consistency, highlighted by a lack of car speed at Adelaide and most recently Phillip Island.

However, in between those rounds the team showcased genuine pace at Symmons Plains with Holdsworth qualifying fourth and fifth, before recording 12th and ninth placed finishes in the races.

Yet to fully explore and understand its newly purchased Commodore, the 33-year-old has pinpointed handling during long, fast corners to be the biggest among a number of areas he wishes to improve.

While Winton has just one genuine high-speed sweeper, Holdsworth is hopeful of a productive day.

The team will be joined by six-time champion Jamie Whincup and his engineer David Cauchi to help work on set up.

Whincup is expected to complete laps along with Holdsworth’s enduro co-driver Karl Reindler.

“We step into the unknown every time we go to a new circuit but this is going to be a building year for us so we can go into 2017 with a car we understand,” Holdsworth told Speedcafe.com.

“We need more rotation (in the corners) and apart from that the car is very good.

“I have got plenty of rear grip on entry and good drive but a little bit more rotation would be a huge step for us.

“We have certainly got plenty to tick off the list at the test day. We have had very limited time to understand this car and try to throw new things at it.

“At the minute we are working within our knowledge window, which isn’t very big, so we have got to expand our knowledge base of the car and gain some more tools to fix the issues.

“I’m expecting the consistency to improve. Our focus is car speed at the moment.

“With car speed, if you know the car is quick enough, you can gain the consistency in the race.”

While eager to solve the team’s consistency issues, Holdsworth believes it would be premature to fit new upgrades to the car prior to exploring the potential of his current package.

“As much as we’d love to be on the same package as the current Triple Eight car, until we have exhausted all options I don’t think it is completely necessary to be spending a huge amount of money to get those upgrades,” added Holdsworth.