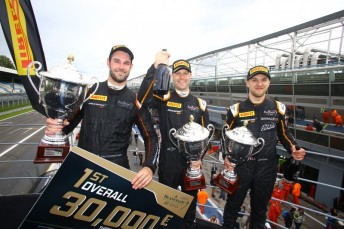 Shane Van Gisbergen overcame late pressure from Maximilian Buhk to guide the Garage 59 McLaren to victory in the opening round of the Blancpain Endurance Series at Monza.

The New Zealander, who shared the factory McLaren 650S entry with Rob Bell and Come Ledogar, was involved in a titanic scrap for the win in the final 30 minutes of the three hour race.

Having taken over the car in the lead for the final stint, the V8 Supercars star faced a challenge from the hard charging HTP Motorsport Mercedes driven by Buhk.

Despite the German’s best efforts to overtake, Van Gisbergen held his nerve to take the chequered flag by just 0.3s for his third triumph in the hotly contested GT series.

“This was crazy. It was a little bit frustrating with all the traffic, but we all had the same problem anyway,” said Van Gisbergen.

“The battle for the last 30 minutes was pretty cool. He had a couple of good goes there, but I really enjoyed it. It was pretty tense, I can tell you that.

“It’s a good thing that we come away with a win on a track where we thought we would not be strong.”

The McLaren trio started the race from a lowly 16th on the grid but an impressive opening stint from Bell saw the entry rise up to third, before Ledger took the wheel where he inherited the lead.

An advantage of nine seconds built up until Buhk took over the HTP Mercedes from Dominik Baumman and Jazeman Jaafar.

The former Bentley racer managed to reel in Van Gisbergen despite navigating his way through traffic, but was unable to pass the McLaren leaving the HTP entry to settle for second.

The M-Sport Bentley of Andy Soucek, new signing Wolfgang Reip and Maxime Soulet claimed the final place on the podium albeit half a minute behind the leader.

Simmons was happy to reach the finish after his car was hit by a drive-through penalty and a spin into the gravel trap during the race.

“I felt good in the car. The team had a done a wonderful job,” said Simmons.

“We were going really well but we got a drive-through for speeding the pits so I had to serve that and I went back out and focussed again.

“But unfortunately on one lap I came into the first Lesmo, the brakes and the rears locked up, and it spun me into the gravel.

“From there we were wounded but my engineers helped me to get back and bring the car home and achieve the goal of finishing.

“I think our result could have been really high with how strong our car was but we have learnt so much to take into the second round at Silverstone.”

“Glad to see the back of today. Two separate incidents on track causing contact for our first driver,” said Talbot.

“Broken suspension ended our race after 45 minutes and gaining 11 positions.”

The Blancpain Endurance Series heads to Silverstone for the second round from May 14-15.