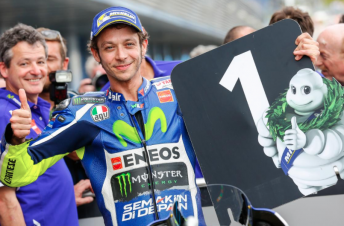 Valentino Rossi will start the Spanish Grand Prix from pole position following a last gasp effort in a thrilling qualifying session at Jerez.

Rossi usurped his Movistar Yamaha team-mate Jorge Lorenzo with a 1:38.736s effort in a fascinating conclusion to the session as Honda’s Marc Marquez just fell short of a third straight pole.

Lorenzo, who had topped three of the four free practice sessions, set the early pace before attempting a three-run strategy.

His second run, however, failed to yield a timed lap with the reigning world champion left unsatisfied with what he described as a ‘defective’ tyre.

Marquez instead sat atop the timesheets at the conclusion of the first runs from Lorenzo and Rossi.

Lorenzo became the first man to lap in the 1:38s in his third run, but his Italian team-mate bested him by just over a tenth of a second as the chequered flag appeared.

Marquez twice went faster to the third sector late on, threatening to spoil Rossi’s warm down lap celebrations, but couldn’t dislodge either of the factory Yamahas.

“We worked a lot because last year we struggled too much during qualifying,” explained Rossi.

“This year with the Michelin (tyre) I feel better and I’ve already started twice on the front row but pole position is different.

“For sure tomorrow will be very, very hard with Lorenzo and Marquez but we are there, we can fight.”

Andrea Dovizioso heads up the second row from the Suzuki duo of Maverick Viñales and Aleix Espargaro.

LCR Honda’s Cal Crutchlow came through Q1 to round out the top 10, while Australia’s Jack Miller qualified 19th on his return from injury.

Next Story Paddon on the verge of WRC victory in Argentina