Paddon on the verge of WRC victory in Argentina

Paddon on the verge of WRC victory in Argentina 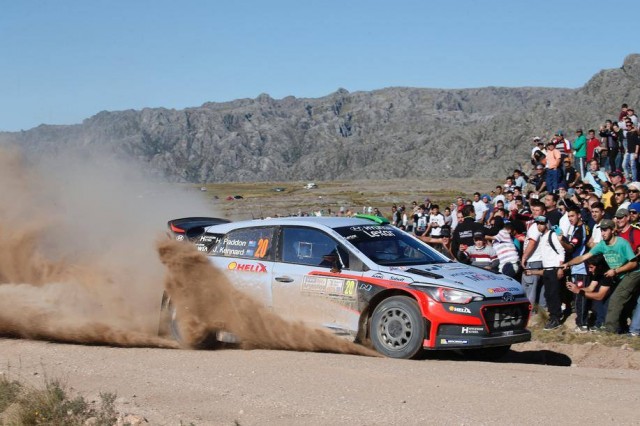 With 60km of gravel stages in front of him and three-time defending world champion Sebastien Ogier hunting him down, Paddon could become the first Kiwi to win a WRC round and thrust him to the front of Hyundai’s factory effort.

“To finish the day leading the rally is unexpected but it certainly changes things for the final day!”said Paddon, who took four stage wins on the day.

“We started this morning with some good stages that I really enjoyed and we were getting good performance out of the New Generation i20 WRC.

“We just wanted to keep the pressure on and to stay in touching distance. Consistency has really been the key.

“We took on a mix of tyres for the afternoon loop with hard on the front and soft on the rear. It was a compromise and I struggled a bit at times with the balance.

“We know tomorrow will be tough – and Seb will push – so we have to be sensible and just do the best we can. We’ll definitely be doing our homework tonight.”

Paddon’s poise was in contrast to Volkswagen’s Jari-Matti Latvala, who while leading the event, had a suspension failure at high-speed and crashed heavily.

“I was in a very fast section where there was a bit of bedrock on the road, and when we went over the bedrock suddenly the front-right top-mount broke and the damper came through the bonnet,” said Latvala.

“At that moment I couldn’t steer the car any more, we went into a bank and we rolled.”

Less than eight seconds off the lead last night, he fell back in the drying conditions as temperatures touched 25˚C and was more than 45sec adrift of Latvala before the face of the event changed.

Ahead of the leading duo, Andreas Mikkelsen’s cautious approach paid off as the Norwegian climbed to third ahead of Dani Sordo, with Mads Ostberg a distant fifth.

It adds up to 55.28km of action and with the sunshine due to give way to rain and much cooler temperatures, the final day will be far from easy for all crews.

VIDEO: Paddon speaks at the end of the day