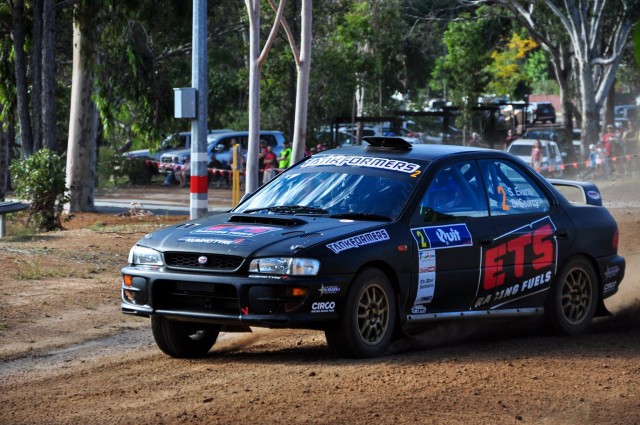 Simon Evans has hit back from a close second place in the opening heat to win the second leg and the overall Quit Forest Rally, the opening round of the Kumho Tyre Australian Rally Championship in Nannup, Western Australia.

It wasn’t a walk in the park for the four-time Australian Rally Champion with Evans pushed all the way by young gun Harry Bates, who got the better of the battle yesterday by just 1.1 seconds.

Today was a far more convincing performance from Evans winning by 41.8s.

Both Evans and Bates finished the event with the same points based on their positions in both Heat One and Heat Two.

However, the bonus point given to Evans for recording the most stage wins during the event was enough to break the tie on points.

“It’s a long trip over here so you always want to make sure you get some points but I love this, I just love being out here,” said Evans.

“The way I look at it they’ve closed all the forests off just for me so it’s just fantastic. The young fellas just caught us unawares.

“We were pretty happy with our pace, sweeping the roads out the front, and I thought everything was pretty sweet and then someone said ‘Harry’s kicking your butt’ and I was like; damn it.”

For the Bates, the son of four-time Australian champion Neal, his performance in only his fifth full ARC event has put the rally world on notice.

“Simon and I will leave here on a similar amount of points which for me is obviously still beyond what I expected coming into the weekend,” said Bates.

“So I think although I’m disappointed I’m not a bit closer to him today and that we couldn’t get that top spot but we still need to be happy with the weekend.”

Justin Dowel and Molly Taylor finished the event on equal points in the race for the final spot on the podium.

The tie was broken by calculating the total competitive time for each crew across the entire event, with Dowel taking third outright.

Disaster struck for Mark Pedder on the third last stage of the event, a broken tie rod signalling the end of their rally and robbing them from an almost guaranteed position on the podium.